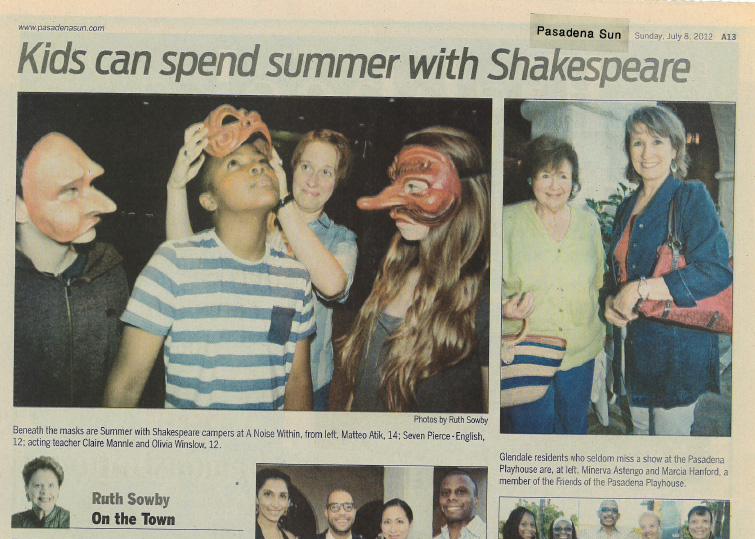 Look what we found!

It’s a 2012 press clip from the Pasadena Sun about Summer With Shakespeare at A Noise Within. Look closer, and you’ll see a 12-year-old Seven Pierce-English getting into some mask work.

Five years later, and Seven has grown up (as an artist, and in height)! In fact, you’ve seen him most recently on the ANW stage working in A Christmas Carol. It’s just another way A Noise Within aims to create an artistic home where artists perform and develop their craft.

Seven isn’t the only ANW artist that started as a student. We’ve interviewed A Tale of Two Cities actress Faith Boeke and The Madwoman of Chaillot sound designer Jeff Gardner about their journey from our youth classes to making their A Noise Within debuts.

In addition to Summer With Shakespeare, there are classes year-round. Ryan Dizon, our crowd-favorite Tiny Tim from A Christmas Carol did Youth Acting Classes in the Fall, which helped him train for his role in the show. 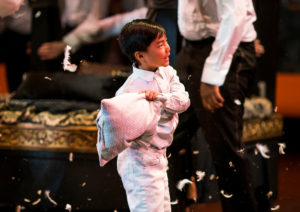 Ryan Dizon in A Christmas Carol. Photo by Brian Feinzimer.

You might also be surprised to find out that our very own Rafael Goldstein did Summer With Shakespeare before becoming a Resident Artist—and you’ll catch Raf this Spring as Henry in Shakespeare’s Henry V.

Just from the last two seasons, here are a few more ANW students who have gotten cast in ANW productions:

Summer With Shakespeare is a summer camp program for youth (Ages 3-18) that takes place right at A Noise Within Theatre. “It was a life changing experience I will never forget!” – SWS Camper

Get more information about Spring Youth Classes and Summer With Shakespeare here.