Home | Behind the Scenes, Education | Interview: How Youth Acting Classes Led to Stage Time in ‘Tale’

Faith Boeke’s professional theatrical debut is this season in A Tale of Two Cities as a member of the mob. This past summer, she was a student participating in Summer With Shakespeare at A Noise Within, which gave her the courage to audition and get cast in a show for the 17|18 season! We talked to her about her experience. Read on for inspiration.

If I had not participated in the education programs at ANW, I would never have had the chance to audition.– Faith Boeke, Tale of Two Cities Cast Member & SWS Alumni

A NOISE WITHIN: What has been the most exciting or rewarding part about being in a full production at A Noise Within?
FAITH BOEKE: This is my first time in a professional production.  I want to be an actress, and having the experience of working with Julia and Geoff and also with all the other super talented actors on stage is the very best part.  I’ve been in lots of plays at my high school, but this is really different.  I feel so lucky to have the opportunity.  I want to study theatre in college and this experience will help me achieve my goals. If I had not participated in the education programs at ANW, I would never have had the chance to audition. 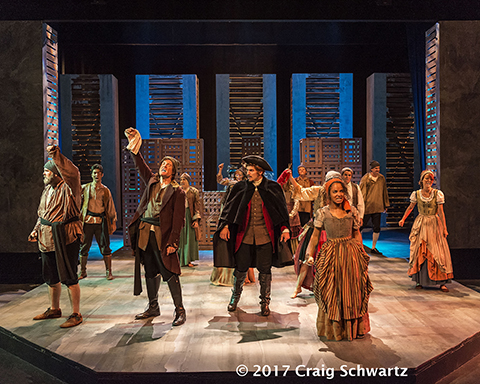 The Mob in A Tale of Two Cities. Photo by Craig Schwartz.

ANW: What did you learn during your time at Summer with Shakespeare that has helped you prepare for this process?
FB: I learned so much about what professional actors do to train for their roles.  I learned about language, movement, costumes, set design.  It was of the best things I’ve ever done.  My favorite part of Summer with Shakespeare were the movement and the language classes.  I loved learning new things.

ANW: Why should people come see the production?
FB: It’s such a great cast and everyone gets along so well.  I think that shows in the production.  And many of us play multiple roles.  I think it’s fun to try and figure out if that’s the same actor or if your eyes are playing tricks on you!