Home | Behind the Scenes, Community | Jeff Gardner is back at ANW after 25 years!

Jeff Gardner is back at ANW after 25 years!

A Noise Within chats with Jeff Gardner, sound designer for The Madwoman of Chaillot and Summer with Shakespeare program alum to talk about his experiences with the theatre, and what he’s most excited for this season!

We hear that you are an alum of Summer with Shakespeare ’93! Tell us a bit about your experience, and how it feels to be back. 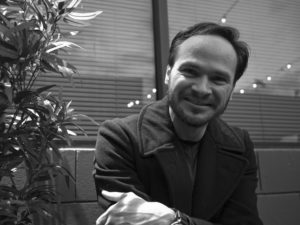 I had just graduated from the theatre program at the Los Angeles County High School for the Arts. A friend told me there was a new classical theatre company in Glendale offering Shakespeare classes for the summer. I think there were 14 of us there that first summer including my friend, Mckenzie Westmore. The classes were incredible. Our days were filled with opportunities to grow in many aspects of the craft: Acting, Voice & Speech, Text, Movement, Stage Combat and Ensemble Work. All of this culminated into a final performance production of Twelfth Night directed by Deborah Strang (“Madwoman” in Chaillot) and ANW’s Joel Swetow. I had such a great time performing as “Orsino” in that one. 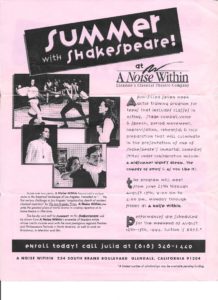 Flyer from Summer with Shakespeare program ’93

Later that fall I got an opportunity to perform in The Tempest as part of the main season. As luck would have it, I was cast as one of the ensemble spirits working alongside ANW’s Steve Weingartner (“Sewer-Man” in Chaillot). I picked up a ton of insight watching Steve in that show. His physicality for Ariel was absolutely incredible.

It’s been almost 25 years but along the way I’ve continued friendships with a few fellow students and faculty from that amazing summer. Coming back here has been so wonderful for me. Everyone here has made me feel like I’m right back home.

As Sound Designer for The Madwoman of Chaillot, what kind of mood are you hoping to achieve for the show? What has the creative process been like?

It’s been very exciting to dive into the sonic world of Chaillot. Stephanie Shroyer and I have been discussing our foundation for the show. We are having fun playing with what is real in our world vs. the illusory. The cafe life in our Paris is very vibrant and colorful. We are using sounds and music that are, of course, very French (accordion, guitar) with a touch of whimsy and the Absurd. Then, as we venture into the bowels of Act II, there is a shift. Our music deconstructs, becoming unusual, dream-like and avant-garde. We are experimenting with percussive layers and tones to help create this descent.

Stephanie and the rest of our designers have been great. Everyone is very open and collaborative as we continue to put the pieces together. There is still more to mine in this wonderfully eccentric play and I’m thrilled to be taking the journey with this team.

Learn more about the show and get tickets here.