Last month we chatted with Samuel Christian, 11-year-old cast member in A Christmas Carol. Sam first attended ANW two years ago as an audience member and has since participated in our Young Actor’s Workshop and Summer with Shakespeare programs. Read on to discover what he learned in these classes that prepared him to be on stage, and his advice for memorizing lines! 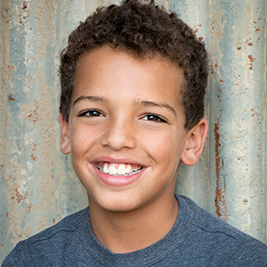 I started coming here 2 years ago. I saw this production of A Christmas Carol and then I started coming to Summer with Shakespeare camp here that summer. After that, in the fall, I took YAW (Young Actor’s Workshop). The first time I saw A Christmas Carol, I thought it was wonderful. I really liked it. It was really fun. I was 8 then, so I got scared. I don’t have to watch the scary parts when I’m in the show because I’m backstage!

What are some of your favorite classes that you’ve taken at A Noise Within?

I really like swordplay. I liked movement class with Miss Sophie too, it’s sort of like dance. So we have a warm up that we do and then we put together a dance and we perform that at the end. I liked that everything she taught us had a story to it. And there was also some history to it. 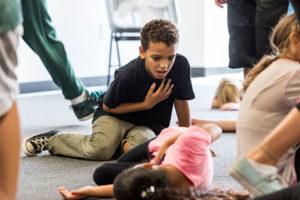 Sam in an acting class in ANW’s Summer with Shakespeare program 2015. Photo by Craig Schwartz.

Is there a class you took here that has helped you while working on A Christmas Carol?

Alison [Elliott] taught acting for YAW and that helped me a lot. She taught me how to concentrate on your lines, how to memorize them, how to do things onstage.

What advice would you give to someone who is going to be in their first play and might be nervous about it?

When memorizing lines, just say your one line one hundred times and you’ve got it!

In A Christmas Carol, you play several different characters. Tell us a little bit about how you manage all those different parts!

You have to set an intention for each character. I play multiple roles. So I have to come up with different characters for each of those roles. For Young Scrooge, I’m Scrooge. I am young Scrooge, so I have to act like this lonely, sad little kid, that’s just busy with his books. For Fezziwig, I’m just there. For Cratchit, I have to be grateful for what I have. Turkey boy brings the turkey so that Scrooge can send it to Bob Cratchit’s house – so for that I have to be in a good mood, because it’s Christmas. For Ignorance – I’m that guy who comes out of Fruit Man [Ghost of Christmas Present] so I have to act like I want Scrooge to come to me and be ignorant. 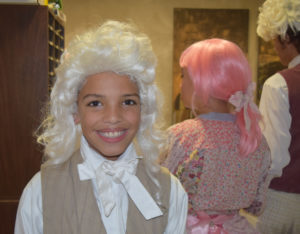 Sam backstage at A Christmas Carol. Photo by Chloe Bates.

When you do it, it’s not actually a lot. Some people have to come up with a lot more for just one character. Scrooge – he has to be an angry old… bag of poop. And then his mood has to change to be an awesome, generous old geezer. He has a lot of things to do.

Do you know what you want to be when you grow up?

Yeah, I want to be an actor. I think I want to do some film and television too, but theatre is probably my favorite.

So, something pretty cool happened at one of our Student Matinee performances – can you tell us about it?

My entire 6th grade class came to see the show. It was crazy. It was weird because everyone was here! They all sat in the middle and I could see them when I was on stage. I talked about it in class before they came – I gave an overview of the show, but I didn’t spoil anything. I came out and talked to them after the show too, and they had good questions.

What has been your favorite part of working on A Christmas Carol?

Just, getting to know everyone. Everyone’s really nice to me and they’re all really fun people to work with, and that’s probably my favorite part. Plus, I know them all. Alison was even my teacher, and I was in the same group with Ashlyn [Woo] and Rigel [Pierce-English] this summer in Summer with Shakespeare. And two years ago I was in the same group as Jack [Elliott]. It’s really cool to get to do this with people I took classes with.

Finally, how has your experience working on A Christmas Carol been different than you expected it to be?

I was imagining just being in a show, just being a show, like the normal shebang. But it’s actually much more fun than that. It’s just really nice, it’s fun. It’s really fun.

Click here to learn more about our youth acting classes! Now booking for our spring and summer programs.

Read about all of the young actors who starred in A Christmas Carol here.