Home | Behind the Scenes | Q&A with Guillermo Cienfuegos

This is your debut at A Noise Within, welcome by the way. Can you share with us your journey before ANW?

I’ve been working as an actor (under my given name Alex Fernandez) in theatre, film, television, and voice over since 1990, when I graduated from the training program at the American Conservatory Theatre. I’ve been directing plays under the name Guillermo Cienfuegos for over 20 years, mostly in the intimate theatre scene in Los Angeles at venues such as Pacific Resident Theatre, The Fountain Theatre, The Blank Theatre Company and at Rogue Machine where I currently serve as Co-Artistic Director. I also directed outside of LA at the Oregon Cabaret Theatre in Ashland and at NYC’s 59E59 Theatre off-Broadway. I’ve been fortunate to have received awards recognition for my work, including the Ovation and Los Angeles Drama Critics Circle awards for my production of Henry V.

Much Ado About Nothing has been adapted into films and continues to be popular in theatres across the country. What was it about Much Ado that attracted you to the story?

Well, it’s obviously a wonderful play, so for me, it starts with that. Anytime I get a chance to work on a great play like this with a talented and engaged group of actors, I jump at it. What really hooked me was that Julia and Geoff attached the theme ‘Daring To Love’ to this ANW season. That really speaks to me – and directly to what I think this play is about. It’s a terrifying thing to love someone, to let yourself be loved. But it’s worth it. I think there’s a lot of heartfelt and hilarious potential in the struggle with whether or not to make yourself vulnerable to that.

Your adaptation of Much Ado takes place in World War II Italy, after the liberation of Sicily. What was the motivation behind setting our story here?

The play features a company of soldiers returning victoriously from some unnamed military action. I wanted to give that some specificity that would resonate with American audiences – and setting it during World War II would play on the nostalgia that many of us feel towards the iconic images and clothing and music of that era. I also wanted to set it in a Sicily that was now ready for celebration and joy after having been under a dark cloud for so long. 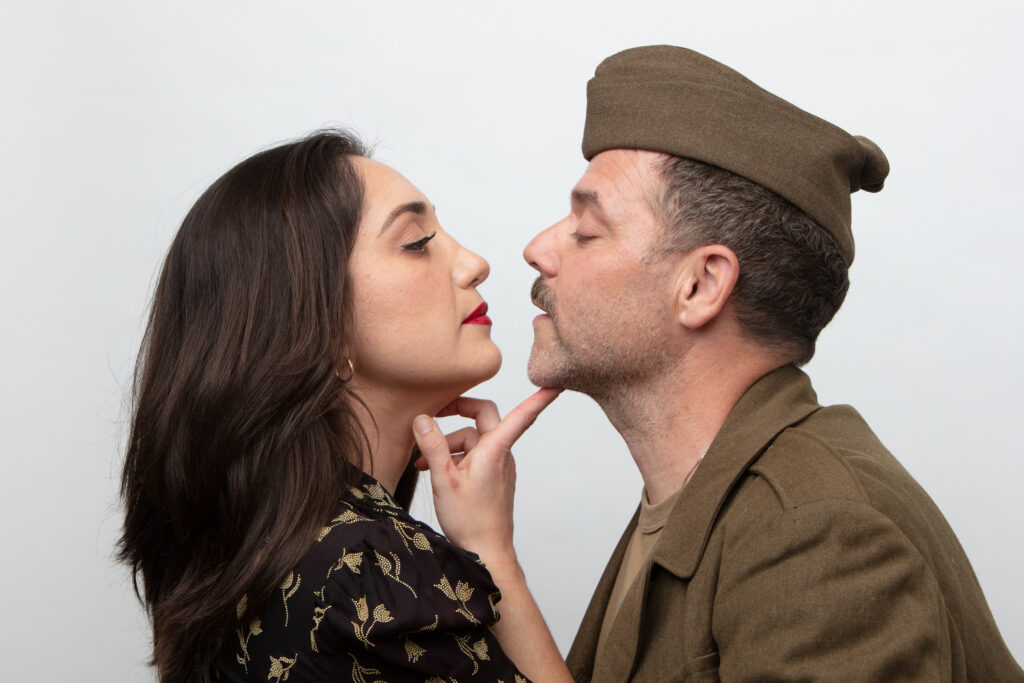 In a meeting with the A Noise Within staff, you mentioned that music will play a part in your production. How do you use music as a storytelling device? And what inspired you to choose this selection of music to help you tell the story?

I intend to utilize the wonderful music of that swing era as well as great Italian music of the period throughout in transitions from scene to scene. We will also have some live music in the production – and the masked dance that appears in the script will be transformed into a fun Italian Tarantella. I hope the music will capture the hope that the characters are taking a chance to feel – and it’s MY hope that the music will translate as joy to the audience.

Something else you mentioned in our meeting is that you “like to make a mess” Can you explain what that means in term of directing or cultivating your creative vision for a project?

I think with the staging of theatre the attempt too often is to grab hold of every single aspect and every single moment and squeeze it into submission, in order to utterly control the outcome. To make it perfect. Life is just not like that. This work is the art of recreating human behavior, human emotion, human impulse, human folly – and there’s nothing perfect about any of that. It’s extremely messy. Acting is actually the art of imperfection. It’s not that I don’t want to rehearse – it’s a composed piece of art after all and each moment in one of my shows has been specifically composed. I just love it when a play feels like it’s possibly going to fall apart at any moment – but doesn’t. It feels like it’s all really happening. Like it’s inevitable. So right or wrong, I like to get into a room with a script, and a group of actors, and just make a mess

You have shared with us some of your plans for Much Ado About Nothing. What are you most excited about seeing come to life on stage?

We’re taking on a rather bold physical staging that I hope will be exciting and whimsical and definitely messy. Some of the choices we’ve made with the characters will perhaps not be what an audience is expecting in a Shakespeare production. Frankly, I’m excited to see if the mess I’m creating will actually work!

Learn more about Much Ado About Nothing.