Long time pass holder, Greg Alarcon, talks to us about why he and his family love their season passes and what makes shows at A Noise Within the perfect family tradition.

This season, you purchased two adult passes and a youth pass! Who do you come to the theatre with? 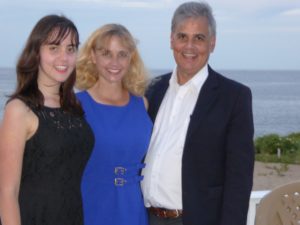 Greg with his family.

Our daughter, Polly, led us to A Noise Within, through spending the Summer with Shakespeare acting program at the old theatre in Glendale. Spending so much time around the theatre sparked our interest in all the plays the theatre was producing and led us to being confirmed season ticket pass holders ever since.

Has Polly always been interested in theatre or did she develop an interest after coming to see shows with you?

Her interest in theatre began in elementary school and led to her attending high school at the Los Angeles High School of Performing Arts (LACHSA) in the theatre department. She has been lucky enough to watch two of her teachers at LACHSA, Jeremy Guskin and Christopher Fairbanks perform on the A Noise Within stages in Figaro and Desire Under the Elms. Polly is currently a sophomore at UCLA as an English major intending to become a Theatre minor.

Do you have a tradition around seeing the shows? (Getting dinner first, having great conversations afterwards?)

We definitely have a tradition. Dinner first, either across the street (PizzaRev) or on Lake (Sharky’s), the theatre, and then a complete post mortem about the play at home. The programs of the plays are so complete with giving the history of the play, facts about the playwright, and the plot that we always go through them in detail to help us discuss the plays.

What is your favorite memory of seeing a show with your family?

I have so many favorite shows at A Noise Within but among the favorites were Pericles (I’ve seen many versions of the show but never one so exciting and moving), Waiting for Godot (the best production I have ever seen of the show), and Noises Off (which shows how expert the company is at farce and slapstick.) Also, anything that Julia Rodriguez-Elliott directs or Deborah Strang performs in is always terrific.

What is it about A Noise Within specifically that made you want to purchase a subscription?

I like the fact the company is so careful in selecting plays that are varied, rarely seen, and that there is always (I think) one production of Shakespeare. I consider myself an avid playgoer with a good knowledge of theatre but I have A Noise Within to thank for deeply broadening my theatre education.

Would you recommend subscription passes to other families?

Definitely. At every performance I’ve been to at A Noise Within, there are students from different schools who come in groups. They are lucky enough to be exposed to the plays thanks to the schools and the generosity of the theatre. I think it would be ideal if the parents would join them because the issues raised in classic theatre are universal.

Since this season’s theme is “Beyond Our Wildest Dreams” what show would you like to see on the ANW stage?

I would like to see plays by some of Shakespeare’s literary rivals such as Christopher Marlowe, John Webster, Thomas Middleton, and Ben Jonson.

To purchase a pass or learn more, click here.

Tell us your own story! Message us on Facebook or Twitter, or send us an email and you could be featured next month!