A huge thanks to everyone who showed up at our Open House event last Saturday, September 17! Though the doors-wide-open, behind-the-scenes-peek was envisioned to be a special treat just for our our 25th Anniversary Celebratory season, its success is inspiring us to make it an annual event.

For those of you who may have missed it, here’s a recap in pictures. 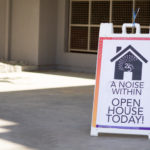 “The Open House felt like an opportunity for us to share some of the ‘insider’ secrets of the theatre with our community,” said ANW Managing Director, Michael Bateman, “It was incredibly refreshing to welcome the public in and find them so curious about some of the things we take for granted.” 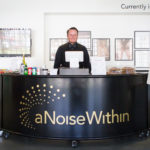 Open House attendees got enjoyed ANW’s new concession stand, which will be open at all productions this season, and is stocked with more treats and equipped with a credit card reader! 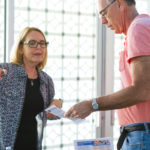 25th Anniversary Honorary Committee Member (and all-around ANW all star) Terri Murray mans the education table and speaks about the impact of our award-winning Classics Live! programs. (Learn more by clicking the picture above) 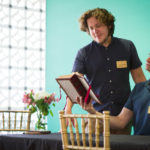 Resident Artists Rafael Goldstein and Jeremy Rabb perform a scene from Arcadia for interested onlookers. Tour docent (and newest ANW staffer) Chloe Bates remarked, “They did the scene a couple times over the course of the day – and it was so interesting to see the subtle changes between each one. The power of live theatre!” Arcadia opened in early September, and ends its run November 20. 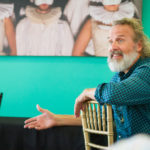 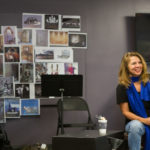 Upstairs, Director Julia Rodriguez-Elliott works with the cast for The Imaginary Invalid, which was only in its 2nd week of rehearsal. “I was initially nervous about having people come into a rehearsal during such an intimate and sensitive part of the creative experience,” said Resident Artist Deborah Strang, who plays Toinette, “but it turned out to be exhilarating to have them there. They became part of the process!” The Imaginary Invalid opens October 15. 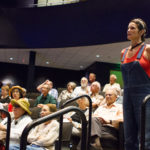 The Maids Director Stephanie Shroyer talks the audience through a few minutes of the show’s technical rehearsal (its first preview was the following day). “Most folks who see the finished product on stage aren’t likely to think about ‘how did they get stockings to not slip on that glossy floor?,'” said Michael Bateman, “But the Open House audience got a great look at how scenic and costumes come together and collaborate on solutions that result in an excellent piece of theatre.” 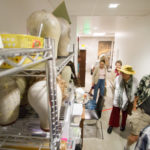 After seeing snippets of tech, tour groups proceeded to the costume shop, one of the most popular stops of the day! 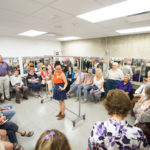 “I was amazed at how curious and well-informed the attendees were,” said docent (and Marketing and Development Coordinator) Melissa Lin, “they really geeked out on the types of sewing machines and techniques we used!” 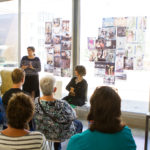 Frederica Nascimento (Scenic Design for Arcadia and The Maids) and Angela Balogh Calin (Costume Design, Arcadia, and Scenic and Costume Design, The Imaginary Invalid) talk about  the creative (and logistic) process behind designing (and resource sharing) for a three-show rep. 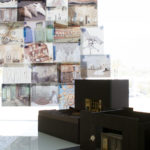 Angela Balogh Calin’s inspiration for The Imaginary Invalid (on window) and models of Frederica Nascimento’s sets for The Maids and Arcadia. Nascimento’s set design for Arcadia has been called “gorgeously understated” by the LA Daily News; Stage Scene LA says it exudes “stately elegance.” 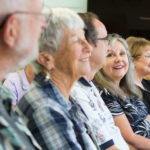 “One of the best parts of celebrating this anniversary is getting to introduce A Noise Within to our neighbors in the community who have never been to the theatre,” said 25th Anniversary Campaign Manager, Barbara Goen, “It was wonderful to speak to folks who are experiencing us for the first time.”