Home | Behind the Scenes | Words Within: Woyzeck

In honor of our first reading series event (Woyzeck on Monday, January 26), Resident Artist and Woyzeck Director Jeremy Rabb shared a few thoughts on the play. 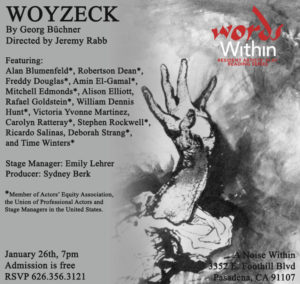 Many folks know the Berg opera, Wozzeck, but are less familiar with the Büchner play. Where did you first come across it?

I saw Marcus Stern’s production at the American Repertory Theater years ago while still a drama school student at the A.R.T. Institute. I had never experienced anything like it and was mesmerized by the characters, the story and the hypnotic eeriness of the play’s world.

What is Woyzeck about, and where is it set?

It’s the story of a working-class soldier who, after suffering humiliation at the hands of seemingly everyone in his life, unravels and commits murder. It takes place in an unnamed provincial German town, and is loosely based on the real-life story of a man from Leipzig named Woyzeck who experienced a similarly violent mental breakdown.

What themes make this especially appealing, and what drew you to the piece?

The rawness of the dialogue and characters, coupled with Büchner’s unflinching drive to confront the underbelly of the human condition, presents a powerful exploration of isolation, obsession and the deep need for love and acceptance. In addition, that it remained unfinished when the 23-year-old author died of typhus adds to the mystique and the eternal wonder of what he might have added or deleted had he the opportunity.

The Threepenny Opera. Both plays expose humanity’s dark side without fear and without sugar-coating a thing, plus each shines a light on the gritty, bleak existence of the working class. Besides pushing us to confront the brutality that surrounds us, both plays are also surprisingly funny.

How does this fit into our REVOLUTIONary spring season thematically?

The play is revolutionary in that it’s considered the first “modern” drama, standing as the first staged work in Western drama to treat a proletarian protagonist tragically. Also, Büchner himself was revolutionary: he co-wrote a political treatise highly critical of social injustice, and as a result was charged with treason. Had he been caught, he would most likely have been tortured and left to die in prison like his co-author. He really was quite fearless.

You’ve assembled some of our favorite actors—Resident and Guest artists alike! How has it been working with this very talented cast?

It’s been a lot of fun. With such a remarkable group of actors at my fingertips, I don’t really need to do much. So many of the actors have worked together so often over the years that a deep level of chemistry and theatrical shorthand already exist, allowing us to put it together with only two rehearsals! I’m very lucky to have so many talented people at my disposal.

What else should people expect from the reading?

Despite the dark nature of the material, the play is actually very funny. You’ll get an opportunity to see some of ANW’s regulars flex their muscles and tackle fun and eccentric characters they don’t often get a chance to play.

Join us Monday, January 26 at 7pm for our free Words Within Resident Artists’ Play Reading of Woyzeck.

For more information about our Words Within Reading Series, please click here.