Home | Behind the Scenes | Who’s Behind the Camera: Q&A with Daniel Reichert

Who’s Behind the Camera: Q&A with Daniel Reichert

Ever wondered who’s responsible for the stunning promotional photos for our productions? Meet Daniel Reichert, an LA-based photographer who helps us tell the visual story of our plays from their first conception.
What was the first show that you worked with A Noise Within? How did you start working with us?
My first photo collaboration with A Noise Within was four years ago – Romeo and Juliet. [Artistic Directors] Geoff and Julia knew me as an actor, and they’d learned of my photo work through the photos I’d taken of their company members. They contacted me, and explained that they needed something other than “production shots.” ANW has an amazing photographer to document their gorgeous productions, but by the time a show is costumed, lit, and on a finished set, it’s too late to promote it with photos from the show. They wanted to get out in front with publicity, and that made a lot of sense to me.

Pictured: Will Bradley and Donnla Hughes. Photo by Daniel Reichert.

Before meeting the actors, I spoke with the costume designer for R&J, Angela Calin, whom I’ve known for years. We talked about the “feel” of the production, and she emphasized that it wasn’t going to look at all like Zeffirelli’s famous (and lushly romantic) movie – this show was going to be urban and gritty. That chat with Angela gave me a bunch of ideas.

The shoot itself was very cool. Keep in mind that the show hadn’t begun rehearsals yet, and the two lead actors had only just met earlier that day. No costumes, and no set – just two brave actors and my camera. I remember telling them that, despite barely knowing each other, they’d have to look as though they were madly in love. To get that gritty look, we had Juliet’s mascara running down her cheek, as though she’d been crying. I told her to bite Romeo’s lip, and lo and behold, we got a great shot. The actors’ willingness to “go for it” was the key.
How do you approach different photoshoots on a show-by-show basis?
You know, the basic approach hasn’t changed in all these years. I love seeing the ideas from [Marketing Director] Eric Pargac – he talks things over with the designers and director, and his creative team, and then he sends me “mood boards,” which contain photos, paintings, sculptures, and other visual prompts for inspiration.  I talk with the director, if he or she is at the shoot, and I bounce around ideas with Julia and Geoff. I think they trust my eye, but it’s a collaborative process. 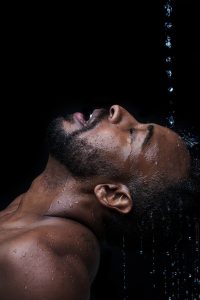 Earlier this season, the director of Gem of the Ocean, Gregg Daniel, suggested in an email that we somehow try to incorporate one of the four elements in the photos. Water seemed the obvious choice for Gem, (and, in my small studio, it was certainly safer than fire.) I had Eric pour it over the faces of the actors, and the photos came alive. Later in the season, I brought “earth” into the Buried Child photos, and it worked well – the play deals with buried secrets, buried resentments, and, of course, a buried child. The creative team at ANW came up with a great tag line for the photo – it think it was “Every family has a little dirt.” I loved that.

How do you tell the story of a play through your photos?
Each play presents a unique challenge, but each time we have to find a way to distill the essence of the story into a photo. I don’t try to actually tell the whole story – that would be impossible with a still photograph. Because we never have actual costumes or sets, my job is to find a something in the faces of the actors that captures the feel of the play. I want to capture a compelling moment. As an actor, I know what those moments feel like – the challenge, always, is to get them on camera. 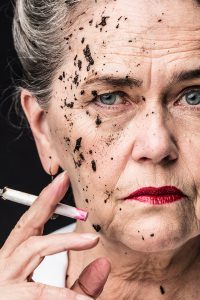 How are these shoots different than when you take professional headshots for artists?
In a sense, the aims are quite similar, but a headshot session involves only one person – the subject. There’s no play, no story, no written character. With a headshot, it’s important to remember that no single photograph is going to capture everything about the subject – that would be impossible. Nevertheless, I need to capture something about that person – an essence, if you will – that resonates as part of the subject’s authentic self. And, of course, it needs to represent that person honestly and compellingly. Very few people enjoy getting their headshot taken, so it’s my job to put them at ease, keep them focused, and coax something they want to share out of them and into my camera. Ideally, it’s a collaborative process, too.
What’s the craziest and/or funniest thing you’ve done for a photoshoot?
I try not to get too crazy during a shoot, (though I’ve certainly photographed some wildly crazy and funny people.) Getting an overhead shot of the actors for your production of Othello was crazy difficult, especially in my small studio. You may recall it seemed to take a village to get that shot! Kudos to all who held heavy lights, and stood precariously on makeshift ladders.
How did you get into this line of work?
I got into headshots twelve years ago. As an actor, I always hated getting my picture taken. I know I’m not alone in this. I think it’s because no one teaches us HOW to get our photos taken. I set out to develop an actor-friendly approach to headshots, and now I teach actors – in the classroom, and in my studio. It’s very simple, it’s just not easy. Like acting, really. Very simple, but not always easy. Like life: very, very simple, but clearly not easy.
Which has been your favorite photoshoot with A Noise Within?
They’ve all been wonderfully challenging and rewarding. Theater is beautifully and heartbreakingly ephemeral, and, in a way, so are these photoshoots. We enjoy the process, we are (hopefully) proud to share the work, and we cherish the memories. And then we’re on to the next play.
You can see more of Daniel Reichert’s work on his website at danielreichert.com!
Tweets by A Noise Within