Home | Behind the Scenes | WHAT IS A HERO?

WHAT IS A HERO?

Antigone cast members share their thoughts on heroism in their play—and beyond. 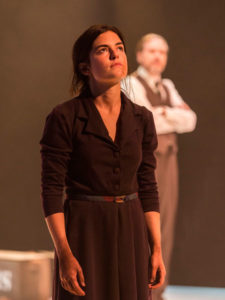 A hero is a human strewn with desires, complexes, weaknesses, and fears who continually chooses be courageous in the face of evil. A hero strives to be selfless and their act of heroism often involves helping others. But I believe you can be your own hero. The fight to be yourself in a world full of judgment and influence can be an act of heroism.

Antigone is a hero because she sacrifices everything she loves and a promising life to save her brother’s soul and honor her family. Although she is afraid and very confused at times she fights with every ounce of her being to conquer fear and resurrect a moral code for Thebes. She has a keen eye for deception and self-deception and continually runs it into the ground. This is a powerful tool of heroism—and is also what makes her “stubborn.”

A hero is a person who makes a personal sacrifice in service to a greater good. In rehearsal last night, one of my

fellow cast members was speaking to me candidly about the logic of Creon’s case, and the phrase was uttered “heroism isn’t logical.” Reflecting on this further, I think heroism is only illogical from a personal perspective. From a worldly perspective—that of “the greater good”—it can be perfectly logical even if it entails the ultimate sacrifice.

I do think that Creon is a hero. He makes a great personal sacrifice– greater than he initially intended (as he discovers by the end of the play). And he does it, very frankly and openly, in service to what he sees as civilization. His one misstep—the mistake that makes him a tragic hero—takes place before the beginning of the play: His decree to let Polynices rot where he fell. The reasons for that decision are complicated, and some of them do have to do with what’s good for peace and for Thebes. But perhaps he forgot that another kind of hero was still living right at the center of his universe: Antigone. Nevertheless, Creon stands by his decree. The rule of law demands it. He puts Thebes ahead of his own family.

To me, a hero is someone who puts the greater good–the highest, most love-filled choice–ahead

​of their own happiness. A hero is a person who fights for what is right not only for the moment but for future generations. One of the heroes who I’ve been inspired by recently is Sylvia Rivera, one of the strongest pioneers of the LGBT movement, who was also known as “the Rosa Parks of the modern transgender movement.” Sylvia spent most of her life living on the streets of NYC, but after she found a home she continued to help the LGBT homeless and even slept on the streets with them so they didn’t feel alone. Her own comfort and happiness were pushed aside for the healing of the community she held most dear to her. Her never-ending commitment to justice, specifically during and after the infamous Stonewall Riots, is very reminiscent of Antigone’s heroism to me. Antigone has a choice to live her life with Haemon and her remaining family and choose ‘happiness’ over what she believes is right. But, knowing that Polynices’ soul will wander lost forever if he remains unburied forces her to sacrifice her happiness for the overall good of Thebes so that she can heal her family’s past disgrace.

At the core of every hero, whether it be Sylvia or Antigone, is the ability to sacrifice their own individual happiness for a belief, mission, or movement that they believe to be more important than their own lives. I also believe every hero possesses the unique power to transform others and incite action. Antigone’s heroism ultimately inspires Ismene into becoming a hero in her own way at the end of the play, when she chooses death beside her sister over her own life.

A hero is a person who continues to get up and fight for humanity time and time again, despite the number of times knocked down, crippling fear, or cultural pressure. Heroes withstand the unbearable anxiety and fear that come with certain defeat and try to make a positive change anyway. These rare humans face persecution, torture, and often death for the betterment of others’ lives.

The Rev. Dr. Martin Luther King Jr.’s life made such an impact on our culture and moved the needle for human rights (we still have a way to go.) He was a man of great ideas and peace and shows that an idea can be more powerful than brute force.

Haemon is heroic in that he chooses to side with Antigone over the easier path of submitting to his father’s will. He would sacrifice his own life, rather than live in a world where such atrocities are done under the guise of politics. Our political landscape today is very divisive and hate mongering is used as a tool for controlling public opinion. Unfortunately, our heroes get drowned out by soundbites, desire for power, and corporate agendas, when there is so much good to be done.

See them on stage! Our world premiere presentation of Jean Anouilh’s Antigone adapted and translated by Robertson Dean is playing in repertory through November 20, 2015. Click here for tickets.