Home | Behind the Scenes | Translating Theatre: Your guide to stage-lingo

Translating Theatre: Your guide to stage-lingo

Theatre language can be daunting for even the experienced theatre-goer. A comprehensive Theatre to English Dictionary does not yet exist, so in the meantime, we offer a few translations from behind the scenes to help you feel more prepared and in-the-know the next time you’re at ANW.

1. Vom. Now we know what you are probably thinking – how many words start with “vom” that do not have to do with bodily functions? Well, you’re right. This one-syllable wonder is actually a shortening of the word “vomitorium.” But rather than a bodily function, the term originates from ancient Roman coliseums in which a pathway (often a tunnel) allowed lots of people to be “spewed” out of a small space in a short amount of time. When we moved into our Pasadena space, our aisles – which are often used as walkways for actors to easily get to and from the stage – were jokingly referred to as “voms,” and the term has stuck for going on seven seasons! (Good luck getting “vomitorium” out of your heads!)

2. Lots of boating terms have buoyed their way into theatre lingo. Deck is another term for the stage. A Loading Dock is the access area to the theatre for moving props in and out. Rigging is the complex system of ropes and pullies that allows scenery and backdrops to be secured, moved, and changed. And Quick Rig is not a type of sailboat that makes rigging faster, but in a similar vein, it is an outfit that allows for fast costume changes with zippers, Velcro, and snaps discreetly placed.

3. Hand props – no, not those foam pointer fingers from your last Lakers game – these are props that characters carry around. They can be part of the plot, (the murder weapon!) or simply part of the character’s ensemble (a purse or hat).

4. Set props are what you might expect – they’re part of the set. Characters interact with these onstage, whether a sofa, piano, or doorway. These movements are meant to seem natural, but are in fact highly choreographed. The actors interact with the set props so much that the set is often referred to as another character in a play. For repertory theatres like A Noise Within, not only is it demanding for the actors to memorize lines for multiple plays, but also movements within and around the set props. In addition, the stage crew needs to know exactly where each piece of the set belongs (both on- and offstage) in order to make sure they have the full character of the stage intact at all times.

The best place to see all of these words in action is our immersion-program of sorts: The Great Escape. Witness one production, then see the stage transformed for an entirely different performance. Dinner between the shows is a chance for you to practice using your new theatre terminology. Try not to be too smug when you know EXACTLY what the actors mean when they say “I’ve eaten so much food my Quick Rigging is about to burst.” You can just give the costume artists a knowing glance, and think to yourself, “Break a leg, kid, break a leg.”

Now that you’re prepared, register for The Great Escape – your opportunity to see two different shows on the same day, and talk to our team of artists about how the theatre magic happens. It’s the perfect time to show off all your new terminology with your friends! See you on the Deck! 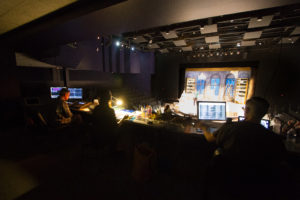