Home | Behind the Scenes | THE PERFECT VALENTINE: ROMEO AND JULIET

THE PERFECT VALENTINE: ROMEO AND JULIET

Dámaso Rodríguez brings his thrilling interpretation of Romeo and Juliet to ANW’s Redmond Stage beginning February 14.
A graduate of our Professional Directing Internship, Dámaso is artistic director of Portland’s Artists Repertory Theatre. Prior to joining Artists Rep, he served as associate artistic director of the Pasadena Playhouse and co-artistic director Los Angeles’ Furious Theatre. Dámaso is a recipient of the Los Angeles Drama Critics Circle Award, the Back Stage Garland Award, the NAACP Theatre Award, and the Pasadena Arts Council’s Gold Crown Award. He was honored as a Finalist for the Zelda Fichandler Award by the SDC Foundation and was named a Knowledge Universe Rising Star by Portland Monthly. He is a member of the Stage Directors and Choreographers Society.

Just like our own first love, we all have our first Romeo and Juliet—experience. What was yours?

I first read Romeo and Juliet. as a 9th-grade student in Arlington, TX. More than the text itself, I remember the Zeffirelli film adaptation that we watched in class following our reading of the script. In 1996, I found Baz Lurhmann’s film adaptation to be inspiring. Shakespeare captures the unifying experience of love and the divisive power of hate.

This is one of those plays that really lets a director make his mark. What will be special about your “R&J?”

I’m fascinated by our human “ritual” of telling the Romeo and Juliet story for hundreds of years. Of all of Shakespeare’s plays, I’d propose that the R&J story is the most familiar to any audience—even to those who have never seen or read it—and even to children who have been introduced to the story (consciously or otherwise) via popular culture re-tellings, adaptations and parodies. Audiences arrive knowing the story’s high stakes—star-crossed lovers from opposing houses whose tale ends in tragedy. 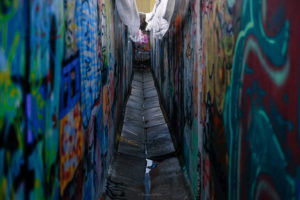 We’ll take this assumption as a starting point for our approach to the production: a ritual re-telling of an old tale for an audience gathered to share the story once again. Our design and concept will evoke a street performance in an economically and socially repressed, centuries-old city. We’ll streamline the story to focus on relationships of the principal characters and utilize minimal props and costumes. Our production will feature as diverse a company as possible and original music composition that will evoke a sense of heightened, near-operatic emotion and ceremony.

People think about this play as a great love story, maybe the greatest one ever—yet there’s so much more that the play tells us, don’t you think?

Oh, yes. Shakespeare’s 16th-century tragedy of young love thwarted by a community’s long-standing prejudice continues to be universally resonant and alarmingly relevant to our ever-polarized 21st century society. We continue to live in a world where hate and bias are taught and passed on to the subsequent generation. Shakespeare brilliantly left the reasons for the divide between Capulet and Montague unspecified, giving the play endless universal resonance.

Romeo and Juliet is the perfect introduction to the Bard for young folk. What aspects of your production of the play will really speak to them?

Younger audiences will see themselves and their generation represented on stage, as they inevitably do. And let’s not forget older patrons! I think they will reflect on their more impulsive younger selves and the natural instinct to pass on one’s beliefs to one’s children. I believe Romeo and Juliet is unique among Shakespeare’s plays in its potential appeal to a multi-generational audience, which is one reason it continues to captivate us all.