Home | Behind the Scenes | The Glass Menagerie First Rehearsal Recap

Compared to the loud, boisterous activity of the large cast of new faces in Othello, the first rehearsal with the cast of four in The Glass Menagerie is smaller and quieter, but no less energized. Resident Artists Deborah Strang, Rafael Goldstein, Erika Soto, and Kasey Mahaffy have worked with each other for several years at A Noise Within, and each of them embodies their role so seamlessly that you can hardly tell the difference between actor and character. Knowing glances, subdued snickers, and shorthand jokes are thrown back and forth across the table in a way that can only happen with people who have known one another so long.

When rehearsal begins, Director Geoff Elliott sets the first scene with Tom Wingfield’s monologue. The opening image the audience will see: a fire escape, a wheelchair, and a projection playing late fifties commercials and television shows. The only other way out of the Wingfield apartment is a large door, through which Tom enters. As he speaks of his father who “fell in love with long distance,” the portrait of his father, the ghostly and unseen fifth character of the play, rises up behind him. This portrait will inhabit much of the play, as Tom recounts his memories with his family. Geoff Elliott explains that Tennessee Williams’ original vision for the play included projections, but the producers talked him out of it, and Williams always regretting giving in to their appeals.

Geoff Elliott explains that The Glass Menagerie is unapologetically autobiographical, with many parallels between the Wingfield family and Williams’ family – including Williams’ sister who had undergone a lobotomy. “His mother and sister affected him in wonderful and desperate ways,” says Elliott.

Everyone in the cast and crew are excited to revive and relive the raw, beautiful memory of Tennessee Williams’ story, which comes to our stage this February. Get tickets today and join us! 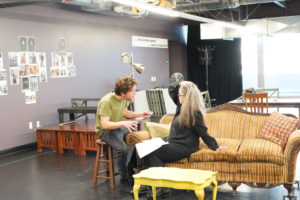 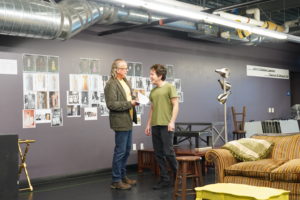 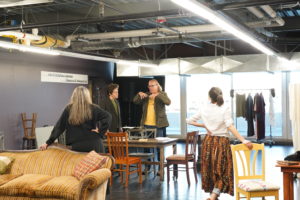 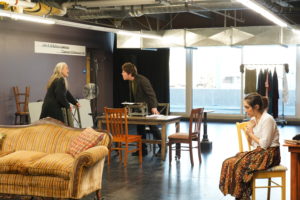