As August approaches, the end of summer marks the end of an era on the administrative floor of A Noise Within. Sophia Brackenridge, intern for the Managing Director and producer of July’s inaugural Resident Artist Reading Festival, will bring her season-long position to a close. Before she leaves us forever to embark on some new adventure, she answered a few questions for us about her time here at ANW. 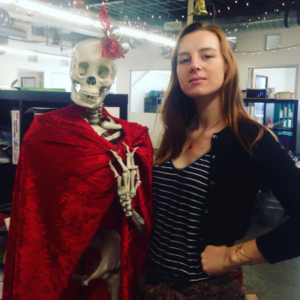 First, tell us a little bit about what your role here has been
I am the Managing Director’s intern and I started mid-October in 2015. I’ve had many projects since being here but the main ones were producing the Resident Artist Reading Festival, taking charge of social media, conducting numerous research projects, and filming and editing interviews with artists. I’ve helped out in the marketing, education, and development departments.

What initially brought you to A Noise Within?
I spent my year abroad at the University of California, Santa Barbara and that is when my love affair with California began. I knew after graduating from the University of Kent (UK) that I wanted to come back to the Californian sun and sand.

I started by researching Californian theatres and soon found A Noise Within. What attracted me to ANW was that it was a classical repertory theatre and was the number one theatre on the Time Out LA list. I am a huge Shakespeare fan and I wanted to work with a theatre that felt the same way. The reputation and community feel of ANW persuaded me to apply for the internship.

What was your favorite performance at ANW?
The most moving performance I witnessed here was, in fact, two days into my internship, when I attended the opening night of All My Sons. Deborah Strang’s performance blew me away, and she continued to do so for the entire rest of the season.

Anything you’ll miss about the job?
In all honesty, I’ll miss being around some of the most dedicated and hardworking people I’ve ever met. I’ve come across amazing people at A Noise Within, and I’ve made some long lasting friendships here — friendships with people who often go above and beyond for the love of theatre. I’ve learned so much from them, and for that, I am incredibly grateful.
And I will miss the year round sun…a lot!

What’s next for you?
For now, it’s back home to France! Where I will eat every piece of cheese I can get my hands on. Then I will continue my theatrical adventures into either Madrid or Berlin or wherever the wind takes me!