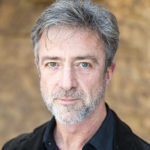 David: I know you’ve narrated a bunch of high-profile books on tape, but the Caesar coincidence is pretty amazing. How did this happen?

Rob: I just got assigned The Death of Caesar out of the blue. Serendipity! I studied Latin for many years, and book publishers tend to remember that. Interestingly, I have no agent for audio books—I just wait for the publishers to call. It’s worked for 25 years.  I’ve narrated maybe 500 altogether.

D: That’s a very impressive number. So, I’m very interested to know: how close on the heels of the book narration was the play?

R: Very. I finished recording The Death of Caesar no more than ten minutes before the production of Julius Caesar began rehearsals at ANW.

D: No rest for the weary!

R:  Indeed. I was assigned the book in November ’14—it’s usually a pretty quick process from assignment to finished product, especially in a case like this, in which the print and the audio was released on the same day.

D: Had you ever acted in the play before?

R: I’ve performed in Julius Caesar twice earlier. As an actor, I have long believed every word that Shakespeare wrote was utterly true; turns out that is definitely not true in the case of Julius Caesar. The Death of Caesar (the book) is a treasure trove of info, so when rehearsals began I was a font of information about what “really” happened on the Ides of March, and why. I thought I’d never shut up!

D: Tell us more about the book’s premise, Rob.

R: With pleasure. The Death of Caesar simply gathers up all the info from the eight original ancient sources, combines it with later historiography, and delivers a smooth, utterly readable version of the events. As it turns out, in reality Brutus was not ringleader—Decius was! Decius (who was really called Decimus) has the small but pivotal role in Shakespeare’s play of the conspirator who lures Caesar to his death by re-interpreting Calpurnia’s frightening dream. Not only that, but Brutus’ mother was one of Caesar’s mistresses. It goes on and on.

R: Well, the biggest deal is that Shakespeare never truly lays out the truth of Brutus’ motive: that unless his dear friend Caesar is killed, the 400-year-old Roman Republic, an incipient representative democracy, will fall, to be replaced by a capricious monarchy. Brutus goes to war and dies for the Republic. Antony and Octavius usher in the Roman Empire, in which the people of Rome never had a voice in their own governance.

D: What are some differences in the perspectives of modern audiences and Shakespeare’s?

R: Interesting question. Shakespeare perhaps thought that his audiences were perfectly aware of what was at stake at this pivotal point in history. Modern audiences are for the most part not.

D: Brutus is one of the great roles not only in Shakespeare, but in the classical canon.  How did you approach your interpretation and portrayal of him?

R: I read with disbelief how naive Brutus was, how removed he was in his nobility from the reality of what had become of the power structure in Rome. He believed that rationality and a devotion to the cause of the Republic would carry the day. So he allowed Antony get up there like a used car salesman, whip up the crowd with a bunch of lies, and turn the tide of affairs toward the disaster at Philippi. So in playing him, I tried (with a lot of help from Geoff) to do everything in a manner befitting an entitled, calm, good, trusting centered patrician.

D: Would that there were more of those around today.