Home | Behind the Scenes | The Secret Life of Jars: From the Recycling Bin to Center Stage

The Secret Life of Jars: From the Recycling Bin to Center Stage

While watching The Imaginary Invalid, it’s near impossible to ignore the plethora of jars sprawled across the stage. Many patrons have asked about where the jars came from and, more importantly, what exactly are the substances inside. We pulled aside our extremely talented prop master, Dillon Nelson, to resolve your concerns and satisfy your curiosity.

Tell us a little about what is the concept behind the jars? What are they supposed to be filled with in the world of Argan?

In the world of the play, our thinking is that Argan is so consumed by his imaginary illnesses that he collects everything that comes out or off of himself. Even things like rags or bibs will be collected as a way to track and compare his sickness. Urine, hair, enemas, and even some medical tools are also part of his collection onstage.

Can you estimate how many jars are in the show and how did you manage to acquire them all?

We have somewhere around 200-300 jars onstage in total. Many of which were collected by our cast, crew, and donors. We had a station set up where people could bring in any empty clear container that they had.  Everyone stepped forward and really helped get us to the finish line. I’m so grateful to have everyone’s support.

What kind of jars are they? How did you make them work for the show? 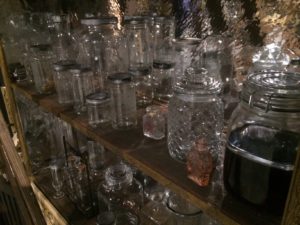 Our jars range from pickle and salsa jars to storage containers and tennis ball tubes. We tried to stay away from too many bottles as we were afraid those would give us more of a bar feeling. To make them work for the show, it was pretty much a matter of painting all the lids and removing the labels (which can be easily done with a steamer).

What did you fill them with? What were the considerations that had to go into filling them?

For our fillings, most are filled with a mixture of food coloring, water, and alcohol. The alcohol is in hopes of keeping bacteria growth to a minimum over our run. Other jars have different mixtures some with leather strips, plastic pieces, coffee grounds, sawdust to give texture to the liquids.

What do the labels say? 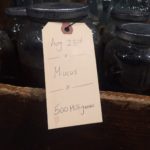 The labels tell what’s inside the container: mucous, urine, etc. They tell the weight/amount of the specimen and the date it was collected.

Do you have a favorite jar? A favorite filling?

I’m a huge fan of the large jars downstage. They really give us a nice impact on the space. As far as fillings go, my favorite is the lobster. He had been our little mascot since day one when Angela (Balogh Calin, Scenic and Costume Designer) brought him in, so he had to make it on the set.

See for yourself! The Imaginary Invalid runs in repertory until Nov. 19th! Click here for tickets.