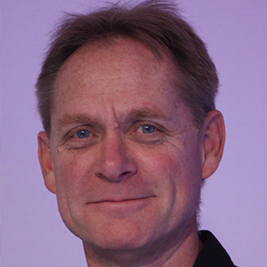 Can you guess how many shows Ken Booth has designed for ANW?

The answer is a whopping 47!

Here, we ask Ken about how he first got involved in lighting and what it was like designing The Imaginary Invalid and The Maids this fall!

What made you want to originally pursue lighting design?

I always enjoyed attending plays and musicals but never considered becoming a lighting designer, although I knew I was attracted to theater. After college (with absolutely no plan) I started volunteering at a small theater in Hollywood (I chose this particular theater because playwright Eugene Ionesco was in residence). I wanted to learn how to do a little bit of everything. Because our set designs were very minimal (based on our small space and esoteric play selections) lighting was a very important element. I became very inspired by this and the Artistic Director allowed me to try my hand in lighting designing for our productions. It was very trial and error and I learned how to light in spaces that were unconventional from a typical proscenium theater.

I think there is more of a challenge of lighting for a thrust stage (with the audience surrounding the stage three-quarter) than it is lighting for rep. A single play in a traditional proscenium space might require lighting to create looks for several settings or locations which is not that different from a repertory plot for three plays. But with the thrust stage a designer has extra angles to consider, especially since most of the audience is viewing the play with the opposite audience or theater architecture as the background. Creating variety in the lighting design is maybe a little tougher when you don’t always have the set and proscenium upstage of the actors. I think you have to be extra creative to make the show look interesting when most of your lighting positions are directly above the actors.

I have designed 47 productions for A Noise Within (including A Midsummer Night’s Dream at the Hollywood Bowl).  It is impossible to name a favorite but my debut with Buried Child will always be special. I thought the acting coupled with Julia’s menacing pacing made it one of the best plays I’ve ever been involved with. Ubu Roi is also special because of its original music and inventive staging. It was also the first time I used moving lights (well, two automated lights with moving mirrors). I can’t decide whether Richard II or Taming of the Shrew (both directed by Geoff) are my favorite Shakespeare productions I have worked on. Both were so opposite each other in mood, but I’m very fond of Shrew because of its hilarity. I am very proud of both Oliver Twist and Great Expectations for being able to create so many moods mixed with lighting effects. Combined there were probably over 400 cues. Finally, our original Christmas presentation of A Wilde Holiday will always be one of my favorites: 4 actors and no set. There was just a big empty stage except for music stands and a ladder.

With Invalid, what feelings were you hoping to evoke with the overall tone of the lighting in the show? And how was the collaboration process with Julia and Angela?

During its non-musical moments (in The Imaginary Invalid) I wanted to create a feeling of isolation when you intentionally shut yourself off from the rest of the world.  During the musical sections I wanted to express a vaudevillian flavor in a Sweeny Todd style. One of my favorite moments in the play is when Deborah portrays a visiting doctor and confuses Argan with her unorthodox medical examination procedures. I love it when the stark operating room light fixture flies down from the catwalk. I think there are several moments in the play when a completely different lighting look appears from out of left field. When collaborating with Julia and Angela, I get that type of encouragement that says: don’t hold back.   Obviously the director and set designer have had conversations way in advance when the production design concept is being formulated. So together they request what feeling and effects they are looking for with the lighting design, but at the same time they allow me much freedom to go off-roading from their ideas. It makes for a productive and trusting working relationship, which I never take for granted.  (I have worked with the two of them on over thirty productions at least). Angela’s set design also allowed me a great excuse to incorporate LED tape for the first time (to under light and back light all the bottles and jars).

What about The Maids?  How was collaborating with Stephanie?

This was my first time working with Stephanie Shroyer. There was a very organic process to creating the lighting cues where we start at the beginning and then see where we end up. I prefer to work that way, and Stephanie and I seemed to always be in sync. I knew in advance I wanted to light this play (The Maids) as if it was a dance piece to compliment the way Stephanie was choreographing the three actresses.  My goal was to follow the characters with specials and lighting looks to tell their story. The concept of real time in the lighting design doesn’t really matter with this show. This has been one of my favorite sets to light (designed by Frederica Nascimento). It is very elegant and textured and offers me a unique landscape to play on. One of my favorite sections in the play is during Solange’s long monologue. These are the moments I live for as a designer, when I am accenting parts of a long speech with internal light cues that seemed to be triggered by the performers themselves. Light cues that create their own time and space outside of the set.

Since this season’s theme is Beyond Our Wildest Dreams, do you have a dream lighting set up you’d love to have in our theatre?

This is my favorite question, because I am always dreaming of creating the most perfect repertory lighting design for A Noise Within. But I am not going to say you can never have too many lights.  I believe in limitations and trying to do more with less. I don’t want the technology to upstage the acting and the play. To me its not just about the set and the stage but about the entire space of the theater. I believe attending a show at the theater is also about the experience of being in the theater itself. I do like to be able to put a light fixture anywhere where a light fixture would add a little more spice to the recipe. Therefore, I would like to add more lighting positions within the theater to create lower level lighting and side lighting. Also for the sake of having a more efficient lighting repertory design, as well as a way to reduce electricity costs, I would love LED lighting fixtures that change color. This would offer even more variety to our already wonderful set and costume designs.