We’re only able to bring our 1920s re-imagining of Shakespeare’s The Winter’s Tale to life with the help of set designers, makeup artists, and our costume designer, Garry Lennon. Today, Lennon shares more about how he brings his own slice of magic to The Winter’s Tale story.

What attracted you to The Winter’s Tale? What is most intriguing to you about this story?

This is the third time I have designed WT. I love the theme of redemption that runs through it. The story is so crazy but at the same time, it feels human. We watch people get obsessed and possessed, in a way, and it destroys lives in an instant. The healing or forgiveness of those acts takes time. It always reminds me of Grimm’s fairy tales, illogical things happen but through fate/ magic/trickery people find their way back to each other. 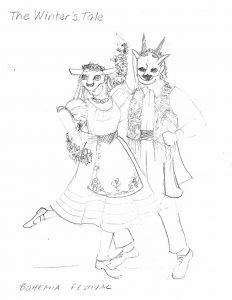 What is the costume designer’s job? How did you begin your process for designing this show?

My job is to help the director and actors tell the story as clearly as possible. I work with the director to establish our point of view, the time period, and the needs of the action/story. From there I do a bunch of research and sketches. It’s an evolutionary process that starts all over again when you work with the actors, budget, costume shop and so on. I like having sketches for the entire show – all of the costumes – but there are often discoveries you make when you are fitting the costumes or shopping that lead to exciting ideas that vary from your sketches. I love those discoveries – the sketches are a guide, but the process is fluid.

How did you first become interested in costume design?

I think all theatre artists started in performing and the interest grew from there. I loved being in plays but I also loved watching plays, working backstage, watching rehearsals, etc. I started making costumes for plays I produced in my backyard at around age 11. Then I realized while doing summer theatre that I could get paid to ‘design’ costumes or stage manage or direct – no one was paying the actors, so I thought it was a good deal. I’ve really been doing theatre all my life at this point. Mostly, I design costumes, but I sometimes design scenery, and I direct too. I miss performing, but I’ve seen so many folks who are much better at it than I ever was! I love what I do! 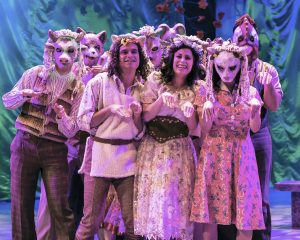 What elements of this play does the costume design help tell the story?

I think there are several different elements that I help define. First, the passage of time – the first half is in the mid 1920s, the latter half is in the later 1930s, so I have to show that passage of time in the styles. Plus, there are several different class levels of characters throughout – so I have to delineate the upper class from the servants from the lower class, etc.

What piece of the show are you most excited to see come to life?

I think the final scene is going to be beautiful in every way, but I don’t want to give it away. It contains one of my favorite moments in Shakespeare or any play. No matter what, it always chokes me up a little bit. I do think the Bohemia scenes will be great fun too. Oh, and the first scene is a great 1920s party that’s going to be gorgeous. So, I guess I’m excited to see the WHOLE play come to life!

Get tickets to see the full magic of The Winter’s Tale today!