Home | Behind the Scenes | Q&A with Military Consultant Jack LaZebnik

A unique part of our rendition of Othello is that even though the language is Shakespeare, Venice stands in for Washington D.C. and Cypress for Afghanistan, and the characters are in modern military uniform. Director Jessica Kubzansky wanted our representation of the military to be as authentic as possible, which is why we have CPT Jack LaZebnik as our military consultant. He kindly took the time to talk to us about his involvement in the production and what people often don’t realize about the military.

How did you first become involved in the military?

I was definitely not one of those kids who grew up playing with G.I. Joe’s. If you told me 10 years ago that I would be driving around in Afghanistan in the army, I would have laughed out loud. Yet here we are.

When I was first looking at colleges, I was being recruited by coaches to play baseball – including a coach from the U.S. Merchant Marine Academy. I took a tour there, but a lot of graduates go on to be ship boat captains and I wasn’t sure that was right for me. Meanwhile, a best friend of mine had just started at West Point, and I discovered more about that academy from him. I don’t do anything halfway, so I thought to myself: all right, it’s West Point or not the military at all. I was lucky enough to be accepted, and the more I learned, the more interested I became.

The military was totally foreign to my parents. There’s a lot of trepidation surrounding the military – a fear of the unknown. No one in LA is familiar with the military, particularly in the performing arts community. My parents had to learn a lot in a short amount of time, but they are very supportive of me now.

How did you become involved in this production of Othello and with director Jessica Kubzansky?

My mother, who is an actress, knew the lighting designer, Rose Malone. One day they started talking about the fact that I was in the military, and how Jessica was striving for an authentic military portrayal for Othello. So, they introduced us, and our partnership took off from there.

What have you discussed about Othello so far with Kubzansky and the designers? What were some of the important things you stressed?

Let me start by saying that all the credit goes to everyone for being so thoughtful and diligent in vetting multiple aspects of the play – costumes, language, ranks, positions, even weapons and security details. For veterans, a common frustration is seeing small uniform deficiencies and inaccuracies that could have been such an easy ask. All you need to do is ask one person who served in the military for more than 24 hours, and you could avoid those mistakes. 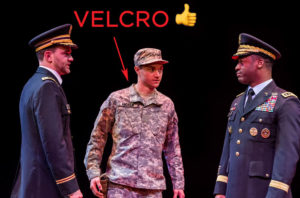 A classic example is the camouflage uniform. There’s a collar with Velcro around the neck that’s supposed to be folded down, but people often show it flipped up like a dress shirt. Day-to-day, we don’t wear the collar like that. The only time you flip up the collar is to protect your skin in the event of chemical weapon warfare. The collar is such a microcosm example, but things like that make veterans laugh and roll their eyes when they see it.

Have you consulted before on the military’s portrayal in film or on stage?

No, I haven’t, but I’m always happy to help out. At the end of the day, you the taxpayer pay my salary. I’d gladly answer any questions from any citizen of the country who is curious to know more.

How is the military typically portrayed? What are you trying to accomplish with the cast and crew of Othello?

When I was preparing for my first phone call with the cast and crew, I was very nervous and unsure what to expect. I talked to my mother beforehand for her perspective. She said that the military is usually shown as stiff, unemotional, ramrod straight – like “Yes, sir, no, sir.” But folks in the military are still normal people who have to buy diapers and who get angry at being cut off on the freeway like everybody else. The military just happens to be their chosen field of work. For Othello, we were interested in injecting the personalities and human traits that any real-life military unit would have.

One of my sessions with the cast was a practical exercise on how to salute. It took everyone about thirty seconds to begin saluting to standard. That’s the point. Anybody can learn to do it if they’re curious to learn and ask questions.

I’d love to share this with Los Angeles people in particular: the initial response to a veteran is typically “Thank you for your service” – which is wonderful and greatly appreciated, of course. However, it’s even more meaningful to ask veterans about their story and what they have done. Not only does this help citizens understand more about the military, it also gives an opportunity that veterans don’t often have to tell their story or experience. I stole this idea from Sebastian Junger, but it’s a good one so I wanted to share it here.