Usually in the orchestra pit, Karen Hall has over 25 musical theater books in her repertoire and has been an on-camera cellist for TV shows such as Glee and Modern Family. Outside of music, Karen has trained in improv, clown, mime, and mask work. She enjoys pushing the visual component of musical performance to better connect with audiences through classical instruments and repertoire. Get to know more about her and her various musical and performance work in our Q&A.

How did you end up joining the production for An Iliad?

I’ve worked with Music Director Jen Lin for the last few years in Los Angeles. She was supposed to MD [music direct] Sweeney Todd at A Noise Within last May and thankfully referred me when asked for any cellists who might be right for An Iliad. She knew I had a background in live-scoring, improv, and clown, and we’ve done some staged readings and immersive theater together in the past. Geoff and Julia set up a meeting, and they liked that I’ve worked on site and production specific music in the past. I also felt comfortable both in the orchestra pit and up on the stage, so they hired me. 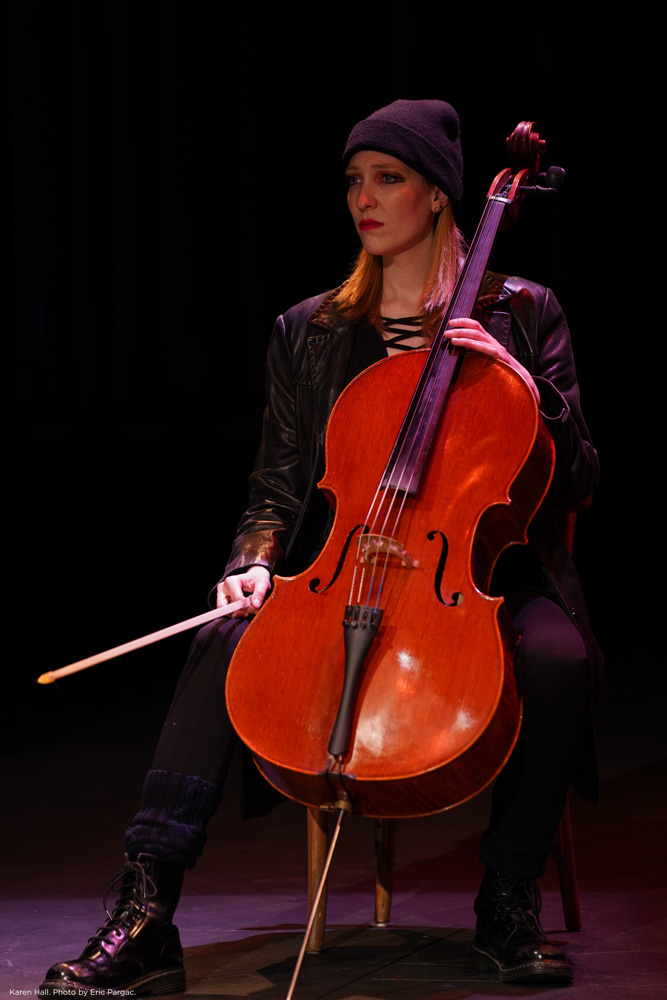 How did you approach the music composition for the production? How did the play’s themes influence you?

Working in a live scoring environment is so magical because the actions and reactions of both the musician and the actor influence the product. I had some ideas coming into the rehearsal process, but so much of what it really needs is revealed as you build it. There’s also a giant gift with the outside editing eye and ear of a director. It makes a world of difference in crafting something you know is serving the whole.

Since we were telling a story set in early Greece, I knew I wanted to build around the musical fifth, as a nod to the Greek mathematician Pythagoras who discovered it. Before composing anything or entering rehearsals, I went through the script and began to circle action words or strong emotional words as opportunities to add energy. After years of live-scoring for clowning shows, which are largely silent or physically driven, I know the power of a small motif in helping the actor call back a feeling or a character with immediacy, and I wanted to gift our actors with the same.

Logistically, a cello can really only play up to two notes at a time. There’s not the same chordal range as a piano or a guitar, so finding ways of adding interest within the limitations of a single, melodically-driven instrument was a challenge. The Muse’s job is to personify and drive the Poet into the difficult places of rage and sorrow, which are overarching themes in the play. Having a willingness to deep-dive into those hidden-away places myself without getting bogged down into technical or compositional factors was very important. I wanted the music to be sparse enough that the Muse, the actor, and the viewer all have to visit these truths within themselves without distraction.

Given that we had two actors alternating in the same role, were you influenced differently as you worked with each actor?

For the filming process, I would say the majority of cues are the same. Each actor had different timing to their lines so the music fills and stretches and responds to match each performer. The benefit of having just a single instrument on stage is that I can vamp whatever I want in immediate response rather than directing multiple instruments or being tied to a written score or specific vamp. 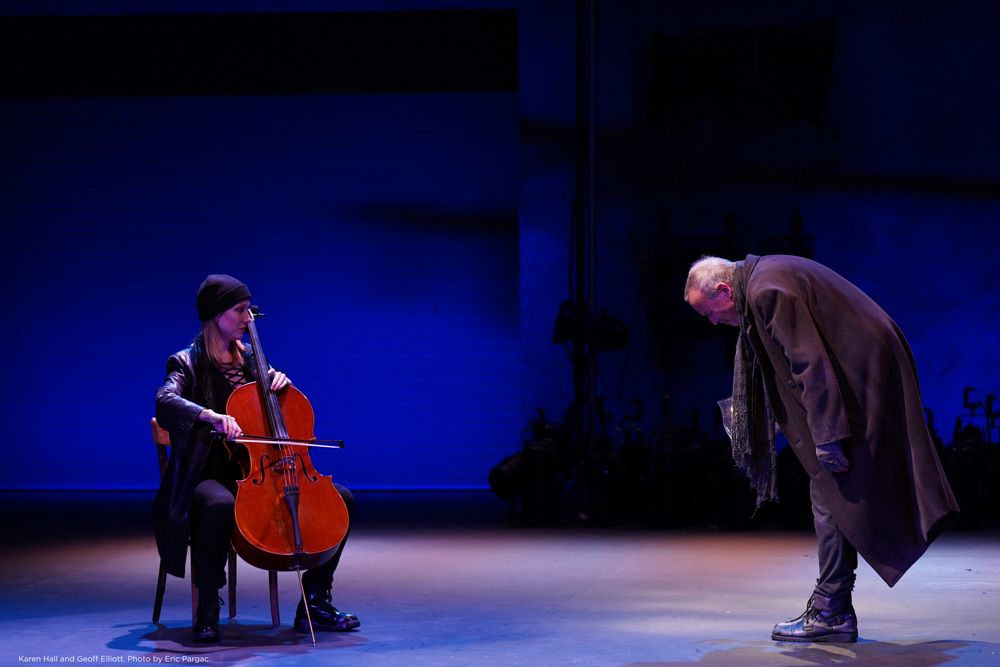 What was it like playing “live” cello music with the performances as we filmed?

My first big job in LA was as the on-camera cellist on the TV show Glee, and I learned early on how valuable visuals in playing are, as well as how grueling filming is and how to budget your energy. The largest challenge for me was that while the actors would switch out, I would go back and film the same thing again. Reliving rage or grief over and over and over again is incredibly draining, and the physicality of cello playing is precise and repetitive. I feel really fortunate to have worked with such kind people and professionals because I had the ability to rest my body as needed. With the actors, we’d film something and I’d immediately be shooting death glares at them from my seat on stage, which is not a comfortable feeling. They’d be glaring back, but it was always a safe and comfortable space for going into and back out of those places.

I loved the feeling of being live even though it’s filmed. I miss audiences dearly, but I felt like my clowning training was showing up. I was so immersed in whatever our actors were doing—even when I wasn’t playing, just following them with my whole attention and being. It was a really beautiful “live” thing to have back in my life for a few weeks.

What inspires you the most about music? How did you get into this field?

Both my parents are pianists, so music was a part of my household. I chose the cello in third grade because piano wasn’t working out, and my parents were making me play something. I was homeschooled, but I knew a girl who played the cello. She was popular, so I logically equated cello playing with being popular. It didn’t really pan out that way… She quit in middle school, but I never stopped playing.

Sound is the most immersive of all our senses, and I’m inspired by the way it has the ability to envelop us. At the same time, our brain forgets about 80% of what we hear in less than 24 hours. I’m very curious about and inspired right now by productions like this one, which allow the music to have a visual component. Our minds have almost unlimited capacity for visual memory cues, and the more traditionally classical musicians can build this direction, the more success we’ll have in connecting with audiences.

What can audiences expect from the production?

While Iliad is a tale of ancient Greece and brutal war tactics, audiences can expect to see a picture of today’s world. They can also expect to be amazed at the sheer amount of lines our actors memorized! I’m excited to see the final cut that our filming team put together, and I think it will offer additional storytelling elements that aren’t available in traditional theater. It should be a really powerful final product.

Tickets to An Iliad are available now.