Q&A with Cassandra Murphy About Reprising Her Role As Aldonza

We’re so excited welcome back Cassandra Marie Murphy to our revival of Man of La Mancha this year. Cassandra was kind enough to talk to us about her return to the beloved character of Aldonza!

What is your take on the character of Aldonza/Dulcinea?
Aldonza is an incredibly complex character. She’s calloused and has learned to survive by any, and all, means possible. She explains her story in great detail to Don Q in the song “Aldonza” – it’s not pretty. You wonder how someone could find themselves surviving that hellish upbringing. She may not be able to read, but she is wise in the ways of the world. I started to recognize her vulnerability when she would get defensive with Don Q. We are only angry at the things we care about. So the more angry she got, the more I understood where her heart was. She lives in a world where hope is corroded. So when Don Q rushes in with these blind convictions about her, I think she secretly wants it all to be true, which makes her abhor him that much more. It’s only on his death bed when he forgets who she is that she realizes being Dulcinea in his eyes is a far better than the Aldonza her circumstances have created. Her character has such a large arc and is truly thrilling to play.

What was it like playing the role the first time versus now? Is there anything new or different you’re bringing to the character?

I had never seen Man Of La Mancha prior to auditioning for ANW’s production. The role of Aldonza was much more physically demanding than I thought it would be. In our La Mancha, Aldonza’s fight scenes are full-on fight sequences. There is no dance or fluff, so if there was anything I wasn’t prepared for the first time around it was that. It was a challenge. But those are the roles that have the largest pay off. My mind, body and soul were demanded in this production and it was well worth the investment. This time around, I obviously already know the role. So, if there’s anything I’m bringing with me this time, it’s a great comfort with the material. I can really sink my teeth into it and relax into the scene work. I can not wait to see what happens in rehearsals, with the original cast coming back.

Could you identify with the hopes and dreams of the characters?
Hope is a huge theme in La Mancha. Aldonza is so hard of heart that she doesn’t even know those hopes are still alive in her. When Don Q sings “Impossible Dream,” she is thrown. She almost can’t help but be swept away by his virtues. They crack her open and lift a mirror up to her. It’s frustrating, terrifying and beautiful all at once. I can identify with that. To have hope and faith in the most desolate of circumstances is the bravest choice you can make. I strive to be the type of person who can find the kind of bravery, in my own life, that Aldonza/Dulcinea finds in hers, at the end of the show. The last lyrics in the show say it all:

“To live with your heart striving upward. To a far, unattainable sky”.

We may never attain it. But we will live striving for it. It’s so good. 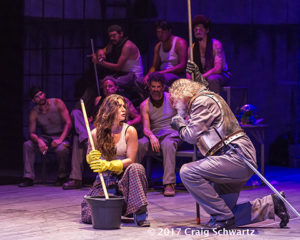 How is the process different for a musical versus a play? How do you prepare your voice for a demanding role like this?
I truly believe preparation is everything. Play or Musical, there is no difference to me, personally. For roles as physically, emotionally and vocally demanding as Aldonza there’s a lot of prep, even prior to rehearsals. I’ve been working out and going over the script. I don’t want to get too locked down to what we specifically did last year because who knows what moments we might find this time around. I want to feel free to play. But you can only feel free if you are comfortable and confident in the script and score. That’s the foundation. Vocally, Aldonza is in the rafters and then the basement in a split second. She’s written that way the entire show. There are optional keys you can sing her songs in, but I really wanted to stretch myself and stay true to the score. So I stuck with the original keys her songs were written in. During performances, I drink this secret Chinese syrup called Peipagao. Now it’s not a secret anymore! It does wonders for my throat during long shows with vigorous singing. I’ve done the same for the role of Eva Perón as well. She is nearly matched to Aldonza in the vocal demanding category.

How did you first get introduced to ANW?
My first introduction to ANW was my audition for Man Of La Mancha. I was walking up to the theater and all I knew about the company was how reputable it was. I was excited that they were doing a musical and I kept thinking, “How in the heck am I going to book this part?!” Geoff and Julia were both so welcoming. They are true masters of their craft. My first impression of the company was them. Their expertise was evident. That first audition, along with the callbacks spoke volumes to me. Every time I left, I had no idea if the role was mine but more than anything I was honored to have gotten as far as I did for a company of this caliber. I couldn’t believe I booked it. But I trusted that they saw something in me and I was determined to rise to the occasion.

What’s your favorite ANW production?
Oh, this is a hard question. Each of the shows I’ve seen at ANW have been phenomenal. The Madwoman Of Chaillot and A Tale Of Two Cities really stick out in my mind. Deborah Strang’s performance in Madwoman is one I’ll never forget, and the same with Freddy Douglas in Tale. The attention to detail in ANW shows are unmatched. Watching their shows, I feel as if I am peeking through the door to someone else’s life. I don’t feel like I am in an audience full of people. It is all mine to experience. The thrust stage helps with the intimacy of course, but it is in the details that I find myself lost in the lives and stories lived on the stage at ANW.