Home | Behind the Scenes | A “phone call” with Martín Carrillo

A “phone call” with Martín Carrillo

Ever wonder how we get that phone to ring on stage in The Maids? (Spoiler alert – Monsieur isn’t actually calling from prison). There is a complex process of wiring that makes the phone ring until you pick it up! Sound designer Martín Carrillo (who previously worked on Antigone and Romeo and Juliet) shares more about this process below!

The Maids phone is an example of the expanded and artistic concern sound designers often show for the verisimilitude implied in period reproduction. When a piece like The Maids presents a phone call which is important to the plot, and placed in a particular moment in history… Sound designers go to work finding the best way to recreate that sound and effect.

And the effect isn’t only about sound. Yes, the sound ideally needs to originate from the phone itself to be convincing and not from a house speaker or even more appropriately from a speaker near the phone, but ideally a phone ringer should be controlled by the actors action of picking up the handset. A phone’s circuit does this–but very often in the theatre this is only emulated and often the suspension of disbelief can be interrupted when the ring proceeds past the actor picking up the receiver… Either due to a late stage management call or obstructed sight from the booth to the stage.

So the ring ideally needs to be produced by the bell mechanism in the phone, and also muted by the actor. It also should exhibit a ring cadence or sequence that reflects the period and its nation of origin. Phones ring differently in different 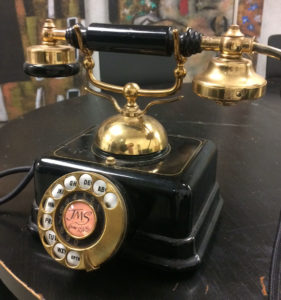 countries, so it is best to leave the ringtone generation to a computer or other mechanism to reproduce faithfully.

To that end, the first task is to find the phone and doctor it to functionality. eBay is an antique finder’s friend and all manner of phones are available. In the theater we have a tool called a Tele-Q. It’s a little battery operated push button circuit box that delivers a 49 volt signal at a frequency appropriate to drive a phone … So in finding The Maids phone we cooperate with the set designer and director to define their aesthetic requirements. They preferred a black phone to match the set. The French style of handset was chosen, and then I procured a preliminary choice from the prop department. When that ringer proved unsatisfactory due to its lack of brass bells, I went to eBay and procured a phone from the 40’s. When it is received, it’s hooked up to a Tele-Q to test that the circuitry on board is functioning.

But that’s only the first step. We found the beautiful jet black princess-type phone that is used in the production, we tested it with the Tele-Q, and it works, but the next step is sending the ringing voltage with consistency to mimic a 1940’s French phone company frequency and cadence.

So the Tele-Q can be remotely controlled by shorting two pins on it’s remote port. Shows are controlled with software called QLab. QLab can play back music and sound files, but it can also communicate with devices that deliver MIDI signals (MIDI is short for Musical Instrument Digital Interface).  MIDI commands can be sent to control a number of devices. In this case I build a MIDI Relay system with sufficient amperage to carry the 49 volts of Telephone signal. At it’s heart is a MIDIWidget circuit board that I procured from its designer, and terminated standard MIDI ports as well as relay connections. The MIDI Widget is a USB device that connects to the show playback computer and receives on and off commands to send and then interrupt voltage at timed intervals.  The commands are translated from MIDI into relay on and off states shorting the Tele-Q remote.
The result? A completely automated phone!

The Maids plays in repertory until November 6th! Please click here for tickets and more information.