Home | Behind the Scenes | Our Favorite Moments

As our 15-16 repertory season winds down (ending on May 15th!), we’ve asked our cast, crew, and staff to share some of their favorite moments from the season.

“Rafael [Goldstein], who really does not like heights at all, being willing to be up on the catwalk as Six Characters opens. The look on his face the one time he was up there with me, Alison [Elliott], and Abby [Craden] will not soon be forgotten!”

– Geoff Elliott, Co-Producing Artistic Director / Director and The Father in Six Characters in Search of an Author

“A favorite moment for me was listening to what the audience reaction would be to the very first line of Shaw’s You Never Can Tellat the first preview. We, the actors, knew the line was funny but did not know whether the audience would feel the same. Their reaction would signal how the rest of the evening might go. So with bated breath we waited for Kasey Mahaffy who played a dentist,to say, after making an extraction of a tooth, “That was my first tooth”! There came a hearty laugh from the audience and we all breathed a sigh of relief feeling the warmth and love of that sound. They were with us! And every night after that we’d hear the same laugh which would relax us, give us confidence, and signal to us that we’re were doing it right! 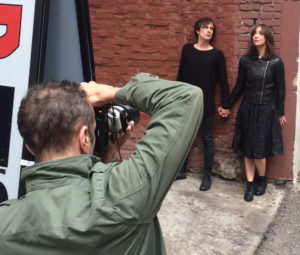 “One of my favorite moments this season was crowding together in the studio of one of our photographers, Daniel Reichert, to capture the heat and the urgency of Romeo and Juliet. Donnla (Juliet) and Will (Romeo) had only had one rehearsal together the previous evening, but they were game in jumping right in and got very expressive over the course of the session. The shoot also involved heading out to one of our “colorful” Downtown LA alleyways, which is where we got the shot of the pair running by the dumpsters. It was amazing to me how Donnla and Will could convey so much with so little preparation and that got me very excited for the 4 weeks of rehearsal that lay before them.

Another of my favorite moments was quite recently at our fundraiser for education. I was the “auctioneer” at that event, but in reality I was simply auctioning off the good feeling that comes with being generous and making a difference. I know our supporters are generous, but it’s truly moving to see people pledge their hard-earned cash to a cause they care about. In a culture that often seems so much about the accumulation of wealth, it’s a joyous occasion to see people come together to give it away, especially when ANW is the cause!

Out of order, another wonderful moment from this past season was the opening of Antigone by our very own Rob Dean. We worked extremely hard with the Anouilh estate for the rights to produce that show, and I felt a great responsibility to Rob to make sure it went smoothly. To get to opening night and to see a play have fresh life breathed into a show that otherwise never gets produced was an incredible experience.”

“It would be impossible to pick just one favorite moment from the season because each show was so different. In terms of range of artistic fulfillment, this season would be hard to beat. From A Flea in Her Ear‘s laughter to All My Sons‘ tears, from Antigone‘s silent screams to You Never Can Tell‘s seaside romp, from the anguish of Romeo and Juliet to the endless journey of our Six Characters – audiences full of regular and new patrons, hundreds of students, friends all, came along with us for this magnificent ride. But, if I have to pick something that struck me in particular about this season, it would be the sense of community that coalesced around Steve Weingartner’s illness. Spear-headed by Rob Dean and taken up by Geoff and Julia and so many others, the effort to help get Steve back on his feet was massive, but this devoted group of artists and friends was undaunted. It was astounding to see this community caring for one of its own and I felt lucky to witness it.”

– Rafael Goldstein, ANW Resident Artist, Mercutio in Romeo and Juliet and The Son in Six Characters in Search of an Author this spring! 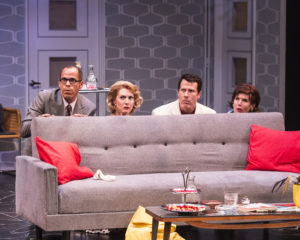 Joshua Wolf Coleman, Elyse Mirto, Jonathan Bray, and Jill Hill in A Flea in Her Ear. Photo by Craig Schwartz.

“The donor breakfast last November where I brought my new baby, in her first trip to the outside world after spending her first week in NICU (Natal Intensive Care Unit) during A Flea in Her Ear. The love of the patrons, the inspiring words on art and theatre from Geoff [Elliott, Co-Producing Artistic Director], and the real support and awe my fellow actors showered on my still-healing little girl, Luna, washed over me.”

– Joshua Wolf Coleman, Dr. Finache in A Flea in Her Ear

“A favorite moment of mine was waiting for Jill Hill and Rafael Goldstein to come on stage for A Flea in Her Ear and realizing they already had. That’s some theatre magic…and really great acting.”

– Maegan McConnell, Ann Deever in All My Sons

“I have two favorites: being scared out of my wits, going on as understudy in Romeo and Juliet and looking into Donnla’s (Juliet’s) eyes and watching the video at our 16/17 Season Announcement and seeing 25 years of memories and faces.”

“One of my favorite moments was during Deborah Strang’s Acting Shakespeare class. Two students were working on Merry Wives of Windsor when she took a moment to walk us all through the scene and explain the long history of Falstaff in Shakespeare’s work. During the second run, the scene completely came to life and was a joy for us all to watch. It seems unfair that one person could be both an incredibly talented actress and teacher, but she is continually just that.”

“My favorite moment was Aaron Blakely losing his place during the staged reading of Misalliance. His character was in the middle of a comically emotional moment when it became clear that something was up. But Aaron soldiered on and kept the circumstances and relationships of the scene alive while confessing, in character, that he was lost. The audience loved it, not because he broke, but because he kept the ball in the air. With the help of his scene partners, he picked up where he left off and continued to drive the scene and the needs of the character expertly. It was great to see an actor deal with that sort of fear by staying present instead of trying to be perfect.” 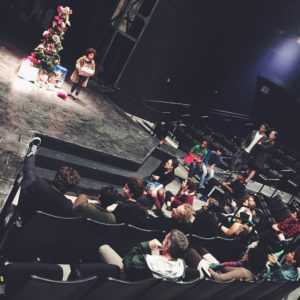 “My favorite part of the season was our Secret Santa gift exchange during A Christmas Carol. It was so fun throughout the week watching people hide gifts for each other around the theatre or give them to other cast members to hand them to them off. For the final exchange, we put the A Christmas Carol tree in the middle of the stage with the gifts while we sat in the house. Rigel (Blue Pierce-English, Tiny Tim), with the help of other cast members passed out the gifts. Everyone was so thoughtful and excited for each other.

Emily (Burst, crew)’s gift to E.K. (Dagenfield, Ensemble) was particularly memorable. He had been Scrooge-like all week and she was determined to change that. She brought him on stage and had a cast member read out a poem she had written which announced each gift. As the gift was announced she would fly them in from the fly rail and have a spotlight on them. It was funny and thoughtful and I believe, changed his mind about Secret Santa.

I feel so lucky to be a part of this community, it a really special place.”

– Natalie Reiko, Assistant Stage Manager of A Christmas Carol and the Stage Manager in Six Characters in Search of an Author this spring!

“I remember wandering onto the dark, empty stage, as I was leaving one night during the first week of rehearsals. I just stood there, soaking in the amazing energy that only an empty theatre can offer. Then, after we opened, Alison and I found this moment at the top of Act III, as she exited one door and I, while in the scene, was shutting another. For a brief second, I had to poke my head backstage to find the door handle, and our eyes met and we discovered our characters, like most of the characters in Flea, probably had a thing for each other. That grew into Allison making hysterical, salacious faces during that moment for the rest of the run, and it was everything I could do not to break as I closed the door and re-entered the scene…standing on the exact same spot I had stood that night on the empty stage.”

– Jonathan Bray, Romain Tournel in A Flea in Her Ear 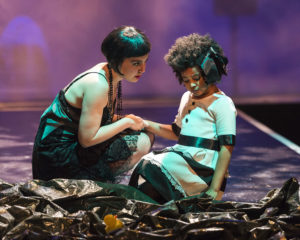 “My favorite moment this Spring is brought to you by Ms. Rigel Blue Pierce-English. She was feeling very ill during one of our performances of Six Characters. I asked her how she was doing after the show and she said “You know what? I have had better days.” What an earnest reminder to us all that the show must go on!”

– Alison Elliott, ANW Resident Artist, The Stepdaughter in Six Characters in Search of an Author

“My favorite moment of 2015-2016 season was when I got to see Six Characters in Search of an Author. I loved the passion that each of the six characters portray. I have to say, It felt like I was watching a movie.”

“We were in the first week of rehearsals on Six Characters, and assembled in the rehearsal studio, blocking, when all of a sudden the door flew opened, and a frenzied Deborah Strang hurled herself into the room— dressed in what I can only recall as a big pouf of white skirts and tulle- she looked like a huge cloud. She stormed in one door, ran at full speed through the room, and out the other door, all while shouting, ‘I should be in this play!!’

We all stopped dead in our tracks and for a moment were stunned….what was that? Did that just happen? It was a great example of different levels of reality playing out at the same time…like the play.”

“We were in the rehearsal room for Six Characters… there was a lull as we were trying to work out a bit of business when Deborah Strang bellowed and came running through the door in a corset and carrying an umbrella, ran right through and disappeared into the back. We all just howled laughing!”

– June Carryl, Actress in Six Characters in Search of an Author and The Nurse/Prince Escalus in Romeo and Juliet this spring!