Home | Behind the Scenes | Meet the Women of Othello

Meet the Women of Othello

We love hearing from you, the audience member, about what you thought of our productions – including Othello. Recently, some of you noticed how several roles traditionally cast as men are played by women in our production and you wanted to hear from the cast about their experience. Today, we’re bringing your questions to our actors and director Jessica Kubzansky for their insight.

What was the thinking behind your casting decisions?

Jessica Kubzansky (Director): Once I had arrived at the choice to set the play today, that decision informed every casting choice I subsequently made. And those decisions were very deliberate, and we took a long time to arrive at them, because bodies tell stories, and the casting choices that directors make carry profound implications that may affect an audience’s understanding of the play, which feels like a big responsibility.

Generally speaking, Shakespeare wrote contemporary plays for his sixteenth-century audience; even the history plays or the Roman plays reflect an Elizabethan sensibility that would have made them feel very immediate to Shakespeare’s audience, which was part of his genius. So I suspect that if he were writing Othello today, he would have written the play to reflect our current world. There would be more people of color in the play, and there would be more women in positions of power, because these conditions simply reflect the world as it looks right now. It felt possible to do that and still honor the themes predominant in the play because they remain screamingly relevant today, for better or ill: anger at being passed over, feeling betrayed by someone you thought you could count on, racism, misogyny, alcoholism, domestic abuse, and above all, the terrible power of love when it is thwarted. 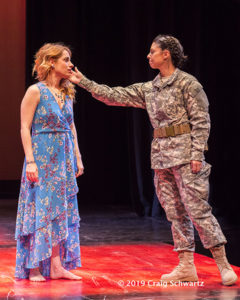 Often the traditional casting mix of characters in any Shakespeare play is approximately fourteen men to four women, and if it was possible to make that balance more equal, of course I wanted to. And because this production is set in 2019, it felt like an accurate reflection of our contemporary world to have many more women in positions of power. I therefore cast a woman to play the Duke; some people have questioned why I didn’t then call her the Duchess, but for me, just as I am a director (not a directress), the Duke is a title of power and not gender. I also cast women in the character formerly known as Lodovico, now Lodovica (who is essentially Condaleeza Rice), and the character formerly known as Brabantio as Brabantia (who is both a senator and a racist who feels betrayed by her daughter). I also envisioned a more contemporary Emilia, who is now an officer in the army, rather than Desdemona’s servant. In addition, I was passionately committed to presenting Desdemona and Emilia as strong women, not delicate flowers easily cowed by their circumstances, as I have sometimes seen them played.

I believe that all the actors approached their roles as three-dimensional human beings, whether the actors were of the same gender as the character that Shakespeare wrote or not. My hope is that because the wonderful actors in this production all committed so fully to their characters, the world of the play will feel as real and immediate to our audiences as it did to Shakespeare’s audiences in his own time.

How does it feel to change the expected gender of your character?

Bonita Friedericy (Brabantia): I wasn’t sure, at first, that changing Desdemona’s father to her mother would function properly. Actually, with the world being updated to 2019, I do think it works. Accusing Othello of using witchcraft to seduce her daughter in 2019 was the more difficult shift for me. But a parent is a parent, and being betrayed (in one’s view point) by a beloved child is gut wrenching no matter the gender. And being a racist is being a racist, no matter the person’s gender. 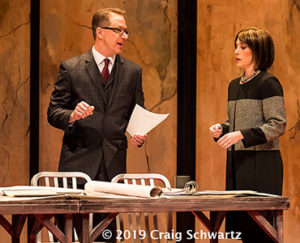 Sally Hughes (Duke of Venice): I was so excited when Jessica offered me the role of the Duke of Venice. Fortunately, we see women in positions of power much more often than in Shakespeare’s day, but there are still a myriad of challenges that they face. In many ways, the process of creating the character was the same as with any traditionally female character I’ve played, but I did think a lot about how the Duke, as a woman, would choose to wield her power. I believe that being in touch with one’s emotions and connecting with other people’s (traits more often linked to women) are great strengths when it comes to leadership. I wanted to dig into how the Duke could do use these strengths, while at the same time retaining full composure and command of her situation.

Myra Cris Ocenar (Lodovica): In theatre, it’s always a process of taking something from the page to the stage, and everything we do in character involves interpretation.  I take the info given in the play, but I also have to take the the givens of the production and the givens of myself and subject them to inquiry.  And Lodovico/Lodovica, whether a man or woman, is a character who is in a position of power, a colleague with someone whom she respected and admired and then is witness to the web of deceit surrounding Othello and his ultimate ruin and the ruin of all those around him. I loved that our Director set Othello in our current time period and changed the genders of the 3 characters in the play – it brought a different dimension to the production that was refreshing and made perfect sense in these modern times, as there are plenty of women in positions of power now and how awesome for that to be displayed on stage in a Shakespearean play.

What do you bring to your individual role that feels unique? 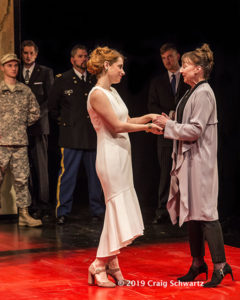 Bonita: As a woman, I felt I could let my emotions be on display a bit more in front of the council, the Duke, Othello… I feel that older men tend to think of displays of emotion publicly as showing weakness. I suppose I might be the shortest Brabantio…

Sally: In addition to usually being a male role, the Duke is also typically played by an actor a bit older than myself. I think being younger, when my Duke faces off with Desdemona’s mother, there is an added element of conflict. We see it in our world every day. The question of “who knows best?” The mature and seasoned voice which has seen and experienced more, or the younger one, that may be more in tune with the pulse of the current time.

Myra: What felt unique was the inquiry I did and how I attempted to balance the givens of the play and myself and the production through my process of inquiry.  Hopefully the way I held power comfortably, but with strength of status and still preserving the compassion and femininity that I bring, as well as the camaraderie with another person of color that holds a position of power.

What’s your previous experience with Shakespeare?

Bonita: I have done As You Like It, Romeo and Juliet, and A Midsummer Night’s Dream multiple times. I was set to play Emilia in Othello (years ago), but had to drop out due to conflicts.

Sally: I’ve been studying and performing Shakespeare since childhood, and I’ve been lucky enough to work on roles in As You Like It, Henry IV Part 1, Titus Andronicus, Twelfth Night, Coriolanus, and others.

Myra: I had studied Shakespeare in acting school and I’ve had opportunities to do a variety of Shakespeare projects in the past, but it’s been a bit of time since I’ve been on the stage with it.  I’m happy to resurrect my love and interest in the Bard as I am a life long learner of Shakespeare.

Tickets to Othello are available now. Limited performances left before we must close on April 28.