Home | Behind the Scenes | Meet our “tech” guru: Samantha Sintef 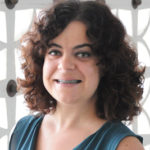 “Ask Sam!” is an exhortation one hears daily–nay, hourly!–here at A Noise Within. If anybody knows where something connected to the stage lives or how it works, Technical Coordinator Samantha “Sam” Sintef is the one who knows.

Sam’s professional experience began even before she earned her bachelor’s in theatre arts at Cal State Fullerton.  “It’s ironic that I never actually worked on a production in college,” she shares, “because I had my first break while still in school.  A friend called me to stage manage Ticket to Ride, and I jumped at the chance. While I’m not altogether certain that the world needs yet another Beatles’ tribute show,” Sam laughs, “it was a great starting point for my career.”

After graduating, Sam gained experience at several SoCal theatres and comedy improvisation venues. When she found out about an internship at A Noise Within in 2013, she jumped at the chance-“I knew I could learn all aspects of tech and stage management at a professional theatre here,” she says.  “It was also a testament to the old saying about ‘being in the right place at the right time,'” Sam believes, “because I was assistant stage manager on five shows, then hired as tech coordinator earlier this year.”
As tech coordinator, Sam works with directors, designers, costumers, as well as our master electrician and prop master to facilitate every aspect of a play’s run, from first rehearsals to final show. (She also hires the staff to perform the Theatre’s intricate changeovers.)  “I consider myself Geoff, Julia, and Michael’s eyes and ears at all times,” says Sam, who will assume her first role as stage manager this fall, for All My Sons. “It’s when everything is flowing smoothly that I know I’ve really done my job.”