Our Resident Artist family is welcoming two new members: Veralyn Jones and Trisha Miller. These actors have become artistic powerhouses at our theatre for the last several years, and we are honored to work with them. Get to know Veralyn and Trisha behind the curtain with our Q&A session! 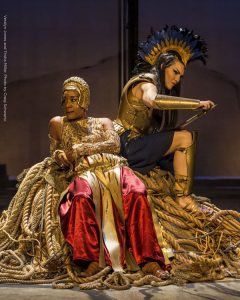 How long have you been working with ANW?

Veralyn: I’ve done 3 productions so far with ANW: The Madwoman of Chaillot, Argonautika, and Gem of the Ocean.

Trisha: King Lear in the spring of 2017 was my first show with ANW. And what an intense show to jump into. But it was pretty clear from the get-go that this was a special place. This group of artists had obviously built a great deal of trust with one another over the years; I felt welcomed from day one. Having trained and worked in all varieties of rep companies, I have a pretty strong sense for what a good one feels like. In the really good ones, you can sort of feel bonds forming right away. That’s a favorite part about the rep company framework: developing a working shorthand so that all the hi-nice-to-meet-you awkwardness disappears and you can get straight to work. Over the past three years, I’ve been in five more productions, understudied a few more, and participated in the staged reading series here at ANW.

What does it mean to you to become a Resident Artist?

Veralyn: Becoming an RA at ANW means that I now have an ARTISTIC HOME.

Trisha: A Noise Within has become my artistic home for the past few seasons, and it’s a great honor to join such an esteemed company in a more permanent way. For me, bliss is collaborating on great material with artists I trust and respect and with whom I’ve developed a kind of artistic shorthand. Julia’s and Geoff’s huge hearts and caring-but-critical eyes have made it possible for me to do work I’m extremely proud of. I anticipate contributing and connecting to ANW’s community in meaningful ways in the years ahead. And I know I am not alone when I say I can’t wait to get back to work. 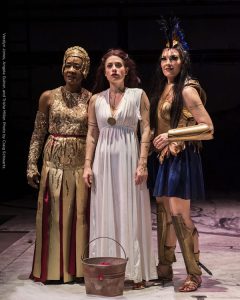 What inspired you to become an actor?

Veralyn: I remember feeling totally awestruck after seeing my first Broadway show at the age of 14. The show was Man of La Mancha. I didn’t know at that time that I wanted to be an actor, but I believe it was what set me on the course. There was a definite fascination I had with the craft, the acting, sets, lighting, costumes, all of it.

Trisha: My mother! I grew up in a small town in the Upper Peninsula of Michigan, where it’s impossible to make a living as an actor. My mother was a drama and English teacher and a fearless, gifted actor, singer, and director (to this day!). A huge part of life was our connection to our wonderful community and high school theaters. I grew up sitting in the audience with my siblings watching Mom’s rehearsals until we were old enough to be involved ourselves. Some indelible moments of my life were from the professional productions our parents brought us to during family vacations. The summer before my freshman year in high school, we saw Romeo and Juliet at the Stratford Festival in Ontario, which was life-altering. That’s something I try to remember whenever I’m performing for a student audience. Someone in the audience, every audience, is going to be seeing Shakespeare—or live theatre—for the first time. The least you can do is make it feel as vital to them as it does to you. (This is also the most you can do.)

What are the most rewarding and most difficult aspects of being an actor?

Veralyn: There are many rewarding aspects of being an actor. Most important to me are the talented and generous artists I get to work with and the compelling stories and characters I get to play. On the flip side, the uncertainty of not knowing when work opportunities will come my way.

Trisha: Oh, man. I love those magic moments in the rehearsal room when something weird or unexpected but totally splendid happens between you and your scene partner—and a scene or character you’ve been wrestling with finally surrenders, finally clicks. That’s not even to mention what a gift it is to tell and live these immensely powerful stories that have been around for four hundred years. When we do our job right, these stories can feel as visceral and significant today as when they were first performed. Being in the room with the audience and feeling like everyone is breathing together, connected with what’s happening on the stage, only a few feet away—there’s nothing like it. The most difficult aspect of being an actor is literally everything else. Staying confident and positive after a lot of rejection. Worrying about making a living. Resigning yourself to a life that’s essentially a never-ending string of quietly stressful job interviews. 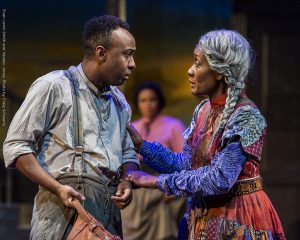 What is your favorite memory at ANW?

Veralyn: I have a few favorite moments, but working on Gem of the Ocean was by far the most personal to me and therefore the most meaningful.

Trisha: Argonautika, hands down. That production was the embodiment of everything I love about theatre. The story felt bigger than life, it was physically challenging, and the actors, production team, and crew developed such a beautiful bond while we were building that world. That play had so many special moments and performing it was as close to non-pharmacological euphoria as I think a human being is entitled to. I never wanted it to end. I still don’t.