Home | Behind the Scenes, Company | Meet our Juliet! 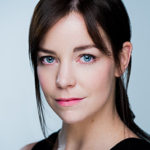 Newcomer stars as Juliet in her first performance at ANW

Born and raised in Galway, Ireland, Donnla Hughes barely stepped off a plane at LAX before she was cast as an understudy in the Geffen’s production of Outside Mullingar. In similarly short order—yet after an extensive search process—Donnla was picked as our Juliet. A bachelor’s graduate in professional acting from the London Academy of Music and Dramatic Art (LAMDA), Donnla won the prestigious Carlton Hobbs Award in the UK and has recorded over thirty plays with BBC Radio Drama.

Donnla, when did you first read a Shakespeare play?

The first one I ever read was The Merchant of Venice – I was about fifteen and it was on the curriculum at school. I remember being completely enthralled by the language, as it was like nothing I’d ever read or heard and I wanted more. I found out that Romeo and Juliet was the alternate option on our curriculum that year so I got a copy and read it. When I finished it I was furious that my teacher hadn’t chosen this over The Merchant of Venice as it felt so much more relevant and such an important play to read at that age!

Have you performed Shakespeare before? If so, who and where?

Luckily Shakespeare was a pretty major focus at LAMDA, the drama school I trained at, and that was where I first had the chance to perform it. My first major role in a Shakespeare was Viola in Twelfth Night, a part I played at the end of my training and also at Shakespeare’s Globe in London. I also recorded the role of Anne Boleyn in a production of Henry VIII with BBC Radio – a reminder that Shakespeare’s plays work brilliantly as radio plays as everything you need to know is right there in the text!

What are the most striking aspects of Juliet’s character—how does she speak to you?

Juliet’s bravery and her ability to remain completely true to her convictions and her heart are for me the most striking elements of her character. Everything in her world, including the people she trusts the most, is pulling her away from Romeo and showing her an easier path, yet she refuses to surrender and remains totally committed to her love. It’s that unwavering commitment to her love and her ideals that I find most inspirational about Juliet.

What has it been like rehearsing with Will? What complementary aspects does each of you bring?

I first met Will at the callback audition and working with him then really added to my hunger to do the play – he’s such a vibrant actor and a brilliant Romeo! Rehearsing has been a total joy so far. We’ve been looking at each scene closely, picking apart the text and getting to grips with the themes and relationships and overall arc of the story – Will’s love and firm grasp of the English language has been very apparent in our table work and he’s provided some fantastic insights. The next stage of rehearsals will be getting on our feet and starting to inhabit these characters – I’m so excited about this stage of the rehearsal and suspect that Will’s high energy will keep me majorly on my toes!