Home | Behind the Scenes | Asked and Answered: The Maids

Asked and Answered: The Maids

Thank you to everyone who has filled our post-show surveys this season! We really enjoy reading all your thoughts and comments. We’ve gotten so many interesting  questions about The Maids that we thought we’d let the cast answer a few for themselves. 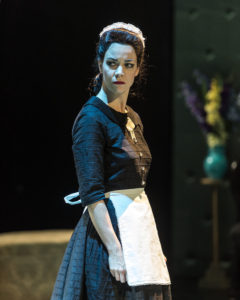 What did you take away from your character? Did you relate to her in any way?

Donnla Hughes: Part of my job as an actor is to make sure I find at least some elements of the character that I can relate to. The more extreme a character is on the page the harder you have to work to bridge that gap and make sure you’re giving a sympathetic portrayal of the role and that you, as an actor, aren’t judging the character you play. With Solange, I spent a lot of time striving to understand how someone becomes this consumed by hatred and obsession. I also focused on getting under the skin of a person for whom anger is a primary driving force. As someone who’s had a much more privileged life than Solange, it’s a big leap to make but also a very satisfying challenge – we can all relate to a certain degree of anger and frustration so it’s about tapping into those emotions and then dialing up the magnitude by a very large degree!

Jaimi Paige:  I related to Claire a lot as being the “little sister”.  I was also very intrigued by her journey of finding her own strength and building on it to write her own ending, exactly as she chooses.

Emily Kosloski: I always try to find things I relate to in any character, and Madame is no exception.  One of her final lines is “…tomorrow morning we’ll just sleep and sleep and sleep.”  With two little kids at home, I relate to that dream the most of all!

This play is pretty physical. How did you guys prepare? 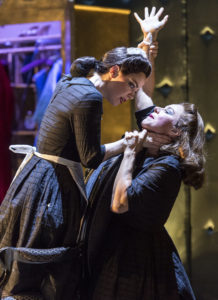 Donnla: It sure is! At drama school I really loved stage combat and got certified to advanced level in the hope I’d be swinging swords like a bada** on the regular. Since then I’ve had only a handful of chances to use it so it’s been a real treat to have such strong physical elements in this production. Stephanie Shroyer, our director, has a background in movement and physical theatre so she took charge of the bulk of the physical elements and then we brought [ANW Artistic Director] Geoff Elliott in to assist with a few scenes. Together they crafted the  intense scenes you see in the production – we have a short call before each show to make sure everything stays precise and safe!

Jaimi: Geoff came in and helped us work out the choreography of some of the scenes, and Stephanie is a very physical and visual director– so she built a lot of the movement and pictures, basing it on what she observed us feeling and discovering throughout rehearsal.

What has been your process of discovering your character? 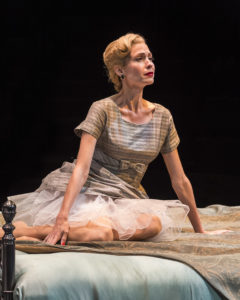 Jaimi:  Finding who I am playing in each moment was a very clinical part of the rehearsal process, but once we started performances it became much more instinctual and natural to bounce from one to the next.  There are moments when I’m distinctly Claire and moments when I’m distinctly Claire playing Madame, but some of my favorite moments are when Claire uses Madame’s voice to communicate something she wouldn’t have the ability to as herself… and also the moments when she’s consumed by a moment and Madame’s presence surprises her by coming through.  By the end they kind of converge into a new persona altogether, which is always a lot of fun.

Emily: Madame has changed a lot since I first auditioned for the role!  Stephanie and I kept discovering new layers to what at first seemed like a fairly frivolous lady.  Even at our last pick-up rehearsal, we discovered a few new things…I think the biggest addition to our rehearsal process was trying to give Madame a certain level of intelligence.  She knows more than she lets on…perhaps she uses her womanly wiles to  get a leg up in this era, but she knows full well that she is doing it.  The maids are not only watching Madame, but she has her own suspicions of them.  She covers well, but we tried to let a few sneak out here and there!

To find out more about the show, read up on Jean Genet himself, and learn about the real life murder that inspired the play, check out our audience guide.