Home | Behind the Scenes | LET’S GET PHYSICAL—WITH FIGARO!

How do you balance a rapid-fire text with the demands of physical comedy?  Our Figaro stars share their secrets and favorite parts of this risky, risqué play.

JEREMY GUSKIN (Figaro): The physical aspects of performing farce are just as demanding as the verbal hoops one must negotiate. But that is exactly what makes it so much fun. My favorite scene to watch is the on-top-of-underneath-the-couch scene in the first act. It has all the fun and frantic pace of a Marx Brothers or Bugs and Daffy sequence. My favorite piece to do is the shaving sequence at the top of Act 3, where I get to channel a bit of Monkey Business and The Rabbit of Seville. The main challenges are: 1) remaining straight-faced watching the action of the rest of the cast, and 2) having too much fun. Good challenges to have!

ANGELA SAUER (Suzanne): For my character, very little physical comedy is actually written into the script. Thus, the majority of the physical comedy that I do in the production is not scripted, but is made up of things that we found during the rehearsal process. I like doing physical comedy, and director Michael Michetti allowed me opportunities to try it out in rehearsal, plenty of which made it into the final show. This includes several backbends, diving onto the floor, sliding on my knees, a backward somersault, hanging out a window (forwards and backwards), lots of leg lifts, jumping under a staircase railing, and doing an army crawl in a corset to name a few. All of those were either bits that I attempted in rehearsal, or things the director asked me to try. We did a lot of experimentation, and that’s what we kept. Some things we hoped to be able to do ended up being adjusted from the rehearsal hall to the stage, once we saw what was actually possible when taking into account the set and costumes.  In all ways, performing in this show is bubbles of fun!

ELYSE MIRTO (Countess Almaviva): My favorite is when the Count shows up and I have to hide Cherubin and then Suzanne!  I run circles around him (figuratively and literally) to keep the wool over his eyes until the end of the act. The Countess is not a natural schemer nor a terribly smart person so the comedy is in watching her try to keep up with the smarter and quicker Suzanne and Figaro while trying to keep herself together.  The challenge is letting the audience in on the joke—letting them see the fear, panic, shock, nervousness, while not letting the Count see it.  Farce requires I play each of the emotions as seriously and as truthfully as in the heaviest drama; I just have to jump between them quicker.  Luckily, I’m a former dancer. It’s especially challenging because in the theatre there is no second take and no close up—but it’s ever so much fun.

NATALIE DE LUNA (Fanchette): My favorite scene in terms of physical comedy would have to be a close tie between two. The first is the scene where Fanchette makes an ‘L’ with her hand to remember which hand is left, but gets confused when she faces the opposite direction. The second is the “kiss toss-around” of Cherubin, because it counteracts this sweet innocent side of Fanchette when she throws him over her knee for a kiss . Until this show, I didn’t fully realize all the technical aspects that went into physical comedy—down to how many takes of a head turn! All of my cast mates are highly skilled in comedy and I’ve learned a great deal from them!

JEANNE SAKATA (Marceline): For me the challenge of performing in Figaro is that the style of the play demands high-energy, intense, passionate life-or-death stakes for my character, Marceline—and yet that has to be balanced with absolute truth of feeling in order for the audience to have a genuine empathy with her. So I always have to go through the script after we have been away from the show for a while, to connect with those genuine feelings once again. As far as the physical comedy aspects of Figaro go, i’d have to say my favorite scene is the leap a couple of characters take off the balcony into the melon patch. It is so unexpected and so hilarious. I also love the garden scene where everybody confuses everybody else to be someone else, and people end up kissing or seducing or accusing the wrong people. It is a masterpiece of mistaken identity!

ANDREW ROSS WYNN (Count Almaviva): My favorite physical comedy moment in Figaro is diving under the sofa and poking my head through the other side. I also love Cherubin’s first transformation into a girl. Physical comedy is the most immediate way to get a laugh. The first time a Cro-Magnon fell down, I’m sure the other Cro-Magnons watching burst out laughing. 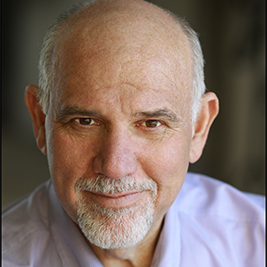 ALAN BLUMENFELD (Dr. Bartholo) Farce is the most demanding genre in theatrical performance. It requires a focus and concentration as well as a dexterity of both language and physicality. It is high energy and great fun. In Figaro, my character, Dr. Bartholo, does not leap and spin and jump at all. In fact, the demand for me is to create an exacting and precise stillness in movement and a flurry of speed and delicasy with the language. I have been very fortunate in my career to play a great many wonderful roles in a great many wonderful farces. Charles Morey’s Figaro is among the most excellent and elegant of the plays I have done. My attention and concentration need to be highly focused and clean. And the payoff, working with our extraordinary company, is the best time I’ve had.

WILL BRADLEY (Cherubin/Doublemain) My favorite scene? It’s a toss-up between two moments. The leap out of the window and the kiss merry-go-round that Michael (Michetti, director) brilliantly choreographed in the first act. And both are for the same reason. They are both a perfect combination of control and freedom that makes the physical aspects of theatre compelling and fun. When I first tried the leap out of the window I was timid but I knew how it had to look in my mind and obviously I couldn’t show any trepidation about stepping off of a ten foot (or more?) platform, backwards in heels, thoroughly convinced that this was the end of Cherubin’s life as he knew it. And with the kiss circle I had to work it out so that it could appear as much as possible that Cherubin is guided, not by the blocking, but by his uncontrollable urge to kiss and be kissed by every living thing of beauty within arm’s length. To do both of these things it took a lot of trust in things I could not control (gravity, the crash-pad, the crew, the other actors) and you’d be surprised how vulnerable it can feel to simply fall backwards at all, let alone off of a platform and not be able to see where you’re going. But when you do your job in the prep and blocking and the choreography and if you stay focused on the acting it actually allows for a element of what I like to refer to as ‘flight’. This is when all of the left-brained work is done and you allow yourself to be handled a little by those uncontrollable forces I mentioned earlier. It’s a balance between the keeping of control and the relinquishing of it. The ladies in the show do a wonderful job of throwing me around and every time I step off that platform I know that if I just wait a brief moment I’m going to be caught in the safe embrace of a big black crash pad placed there by the crew. The knowledge of safety and the thoroughness of our prep and our rehearsal process allows me to put my focus on the acting. It’s a concept that I imagine dancers are very familiar with, you have to ensure that everything is safe so that you can leave a sliver of danger for yourself to experience in the moment. And then what you have is not a stunt but part of the story!

See the cast in action! Figaro runs in repertory until May 10th. Click here for tickets.