Home | Behind the Scenes | Klint Flowers: Makeup is the most incredible accessory for storytelling

Klint Flowers: Makeup is the most incredible accessory for storytelling

Our spring production of Henry V shows off a side of the Warrior King never seen before – more rock-n-roll than pomp & grandeur. The grittiness of our staging comes through especially in the makeup. Klint Flowers, Wig & Makeup Design for Henry V, reveals some insights into his approach to the show, and the details that go into creating convincing battle makeup. As he puts it, “in Henry V, not only does the makeup advance the look, but is essential in the story telling and aids the audience in their personal theatre journey and understanding of the show.”

What did you look at for inspiration for Henry V?
Many of my design inspirations were actually from the costume sketches from our designer Angela Balogh Calin. Her unique take on the “timeless” costumes were a fantastic jumping point to draw inspiration from. From there I researched anything and everything from spy movies to unique hair braiding to documentaries on King Henry himself.

What was your design process like? Was there collaboration with the actors?
The collaboration for Henry V can be seen through each character during the show. This run would be impossible without [it]. I individually met with each actor and discussed any ideas they may have, and how to make their track the most comfortable, realistic, and continuity. I believe when making battle makeup convincing, it starts with a good character back story. What happened to you in battle? Were you on the front lines? What weapon do you yield? Once these ideas start to form you can start visualizing how that event would impact how “dirt” or “blood” are applied on your body. 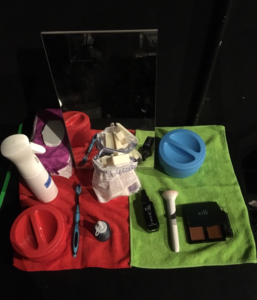 Actors have to apply their own makeup before or during each show, and there are many makeup changes throughout this show. How did you tackle this challenge?
This production is very fast paced and leaves the actors minimal time to accomplish drastic change in their appearance. This brought forth some exciting challenges for myself as designer. In efforts to accommodate the fast pace, “blood and dirt” stations can be found throughout the backstage, actors go here and can apply their full desired look. [Post-show] skincare was also a discussion – wearing such a heavy makeup that regularly can be a lot for the skin. Makeup can sit different on skin types and when not removed right can create blemishes and/or rashes. The removal process and repair process are key to keeping the actors comfortable and happy.

For Rafael Goldstein (as King Henry V) in particular, how did he take to the looks and did he have any of his own ideas?
From our first production promo photo shoot Raf was excited and willing to try any ideas I had! In a show like Henry V, I believe more is more – there can never be too much dirt and blood from fighting. I exercised ideas on Raf from spray blood, blood packs (you bite in your mouth), to my own homemade blood recipe applied directly to his face. Through conversation and on stage in rehearsal Raf made his unique take on King Henry very clear and present. This was tremendous in developing the make up and hair side, as he truly put his take on the character. 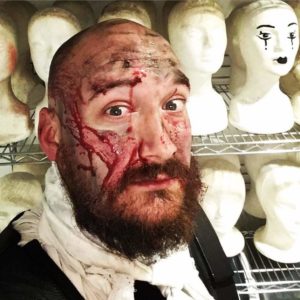 How do you make battle makeup convincing?
Typical stage make up is considered a form of “beauty makeup” and in our case, when blood and dirt are used – it is not intended to be beautiful. On stage you will not see any product applied like your typical blush or bronzer, or to your typical locations on the body. Blood and dirt can be found on the hands, arms, and necks and some clothing pieces of the cast.

Can you point out some nuances to the battle makeup that the untrained eye is less likely to notice?
A key factor is makeup tones, not everyone has the same exact blood tone and no one in battle experiences the exact same thing. By ever so slightly mixing variations of color in the blood and dirt this will begin to create a depth on stage and realism to the untrained eye. Audience members can then develop through their third wall what they think may have happened to that character “why does he have a wound on his hand and forehead?”