After hearing from the lovely returning ladies last month, it was time for the guys to shine! 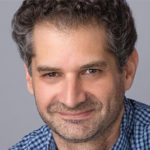 Following his terrific turn as Tiger Brown in The Threepenny Opera, Resident Artist Jeremy Rabb returns this fall in two pivotal but entirely different roles: Ferraillon in A Flea in Her Ear and Jim Bayliss in All My Sons.

As he sees it, “Ferraillon’s a former sergeant-major who tries to pretend that he runs a highly respectable hotel with honor and military discipline. In reality, it’s a by-the-hour establishment for discriminating adulterers. Living the lie is exhausting, as is trying to keep his employees/soldiers in line. The contortions he goes through to keep up appearances, switching back and forth between ingratiating proprietor and brutal drill-sergeant, make him particularly fun.

In many ways, Jeremy says, “Ferraillon is a send-up of the cocksure military man: the self-proclaimed defender of morality, the uncompromising stickler for order, who’s actually surrounded by sexual impropriety. Audiences will enjoy his futile determination to treat the hotel like a barracks, as well as the comic abuse he unleashes on his porter. And who can’t relate to wanting to control things that are completely beyond our control?

Bayliss, on the other hand, embodies the struggle over the ‘right’ path in life to take. He grapples with regret and disappointment in a very human and vulnerable way. And even though he strives to help others keep things under control, he has difficulty doing the same when confronted with his own life choices. The strain of trying to balance one’s own happiness with that of loved ones can be overwhelming.

His self-reflection provides some of the best insights of the play. He’s self-effacing and sardonic, but haunted by a past decision that keeps him from finding peace. He loves his wife at the same time he resents her, which makes his situation that much more complicated and difficult.”

Jeremy says, “I’m really looking forward to tackling two such disparate, yet equally compelling, characters in one season. Playing a subdued, contemplative man one night and a broadly physical soldier the next, each with such a different energy, might be tricky. But obviously, knowing the other artists involved as well as I do, will make the challenge that much easier and more gratifying. It also doesn’t hurt that the two plays are each marvelous in their own right. Flea is hysterical. Just try to find a funnier play with more lively characters and more hilarious situations. The dialogue that Ives has crafted is so concise, so unpredictable, so fun…plus the off-the-wall physical comedy…it’s all just too good.

Sons is beautifully heartbreaking. The way characters so desperately try to change the perceptions of those around them, along with the lengths they go to protect themselves, is really touching. I think our audiences will be surprised and challenged by how emotionally absorbing they find the Kellers’ world.”

Resident Artist Alan Blumenfeld, who charmed as Dr. Bartholo in Figaro, reprises his A Flea in Her Ear role as Etienne, whom he played in ANW’s production in Glendale. “He is such a delicious and dry character,” Alan says. “The humor is in how Etienne takes the crazy shenanigans in stride with wit and non-judgmental understanding. He is the consummate professional butler, always there when needed and never requiring anything—just being of service.”

And the play? “This is a rollicking farce in the best tradition—the original situation comedy! It is hysterically funny, fast, with tons of sight gags and amazing, outrageous characters and behavior—the perfect soufflé for our times.”

Our most “homegrown” resident artist, Rafael Goldstein garnered splendid reviews for his piercing performance as Marc Antony in Julius Caesar. This year he plays the seminar role of Chris Keller in All My Sons as well as Camille Chandebise in A Flea in Her Ear.

Often seen as the pivotal character in the play, Chris “is a survivor. He’s been through the war and has come back home to find that the war isn’t really over,” Rafael says. “He knows, with the greatest certainty, that if he can develop a meaningful connection with someone in an open and honest way, then his survivor’s guilt will be assuaged. Like every tragic hero, Chris is looking for relief, and goes looking in all the places that will cause him and everyone else around him the most pain.

All My Sons is among the most trenchant plays of an American master,” Rafael continues. “In it, he has crafted a story about grief and sin and redemption that rivals the Greeks in its power. Geoff calls this play ‘staggering’ and I’m inclined to agree. I think our audiences will be talking about this one for quite a long time.

Camille, on the other hand, “comes across as sober and sensible but is, in fact, quite the sexual adventurer. He’s a ladies’ man, a rake, and he has no hard palate…an interesting challenge. I rarely laugh out loud while reading scripts. This one had me doubled over, and I can’t wait for people to see it.” 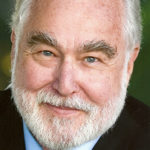 A much-loved member of the A Christmas Carol company, Mitchell Edmonds returns to A Noise Within to play Baptiste, the uncle of Ferraillon, who owns the Frisky Puss Hotel in A Flea in Her Ear. “He spends most of the second act in a bed that keeps appearing and disappearing, mainly at inopportune times,” Mitch advises.

This seminal character is, he says, ”A device introduced to fool and confound jealous or suspicious lovers who are looking for their partners. Hopefully the audience will find him (me!) funny. The play is so emblematic of the best kind of French farce—it’s played very fast by lots of big, confused characters making more mistakes than you’d think humanly possible. Although it was first performed in Paris in 1907, it’s as funny today as it was when first performed,” Mitch says.

After playing the double role of Filch and Weeping Willow Walt in last season’s The Threepenny Opera, E.K. goes for another double-header this fall—as Rugby in A Flea in Her Ear and Frank Lubey in All My Sons.

As to the latter, E.K. says, “Frank Lubey is a really fascinating character. Either through luck or coincidence, he aged out of serving in WWII by only a year each time they called for men to enlist, and so he is surrounded by contemporaries who fought and suffered terribly in the war, but never served himself.

Frank feels a sense of guilt at not having served in the War and having been home starting a successful business and getting married, but also a sense of envy, that he does not share the bond of war with his contemporaries. Frank is an ardent believer in astrology and for most of the play is trying to discover if ‘the stars’ indicate that Larry is alive. In a sense, he is enabling Kate to go on with her fantasy that her son could return home any day. While I won’t know until I get into rehearsals if Frank truly believes that Larry is still alive or if he’s merely humoring Kate, I think audiences certainly can identify with ambivalence over telling a friend the harsh truth, or allowing them to indulge in a fantasy.

All My Sons is an American classic. It’s a play I know very well, having studied it at length in college, and yet when I re-read it a month or so ago, I found myself unable to tear myself away from the page. It’s an incredibly tense experience, even when you know what’s coming. I’m a big fan of Miller’s work in general, but I think moment-for-moment this is his most engrossing play.”

As for Flea¸ EK admits that he’s still wrapping his head around Rugby. But this much he knows: “Audiences will love the relentless pacing of the comedy, the hilarious situations of mistaken identity, love affairs thwarted, and lovers reunited.

The actor who commanded the stage as Kurt in The Dance of Death will be back with the Company as Creon, the newly crowned king, in Antigone.

What sets this character apart: “Creon is a king,” Eric says, “but he’s an unlikely one. He didn’t want to be king. He’s not a warrior or a natural leader of men. He’s more interested in books and quiet contemplation–a trait he and I have in common. But he’s ended up in this position because someone has to be king and he’s the one that seems to make most sense from a purely practical standpoint. It is not a comfortable arrangement for him.”

“In many ways,” Eric says, “Creon’s character is pivotal. Essentially, he represents adulthood and all of the compromises and new understandings that come with age and wisdom. I’ve just re-read the big scene–which is sort of the cornerstone of the play–between Antigone and Creon, in which Creon struggles to show his young niece the wisdom of compromise, against Antigone’s hard-headed refusals. And I can hear loud echoes of arguments I used to have with my own parents when I was an idealistic and hot-headed teenager. I think anyone who remembers their own such squabbles, from either side, will find much to relate to in that conflict. Man, you really think you know it all when you’re young, don’t you? I know I did. And, actually, I don’t remember ever recanting that position. I still know it all and I know even more than I did then–which is mostly, of course, that I don’t know much.”

As for this version of this timeless play Eric believes, “Anouilh’s adaptation, and Robertson Dean’s superb translation of it, is very modern in its language and sensibilities. It makes the themes of this ancient drama really come alive for a contemporary audience. And one of the things it shares with its classical predecessor is a directness in dealing with those themes. The play is very short and to-the-point. You won’t leave with any confusion as to what the author was getting at, yet there’s still plenty of room for argument, at the end, about who was in the right.”