INSIDE THE INSIDERS: Where “Friendly, Bright, Insightful” Theatre Lovers Meet! 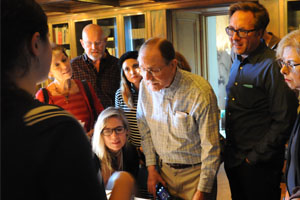 The INsiders and ANW Resident Artists on a trip to the Clark Library.

I am a relatively new member of ANW’s INsiders literary club and as such, I might not be the person you would expect to hear from on the merits of the group. Some of the people in the group have been there since the beginning, coming faithfully to the meetings eight times each year for more than a decade now. But what I can attest to, after a mere one year as part of this group, is that you will find a bunch of friendly, bright and insightful theater lovers—who welcome newcomers with open arms.

INsiders meets once per month during the fall and spring when A Noise Within’s season is in full swing. There is one meeting for each of the six new plays produced in the season, and one meeting in each of the fall and spring on a special topic. Each of the meetings is led by a top-notch scholar, typically from the great set of southern California universities and their outstanding English and Theater departments (and sometimes others—such as the French literature and theater professor we recently enjoyed in a discussion of Georges Feydeau’s A Flea in Her Ear).

Reading the scripts and then coming together to discuss these plays with a scholar – and often an actor from the production—and each other brings stimulation and insight that contributes immensely to the enjoyment of the classics ANW brings to the stage. This past Saturday I attended the opening night performance of Arthur Miller’s All My Sons followed on Tuesday by our INsiders discussion of Rob Dean’s adaptation of Jean Anouilh’s Antigone. I was excited to learn more about the many ways in which Sophocles’ play (and sometimes Anouilh’s version) have been put to use in contemporary political contexts: a Georgian language version during the reign of Shevardnadze, and a version by Athol Fugard and others performed at the Robben Island prison at the height of the horrors of apartheid. The timing of seeing one play and discussing the other brought to mind for me the interesting ways in which both plays—very differently—comment on personal interest vs. the good of the state or the community. Are Antigone and Joe Keller two sides of the same coin—both bound up in personal interest at the expense of others, one for ambiguous but arguably sympathetic reasons, the other out of greed and cowardice?

Join us at the INsiders – we would love to have more opinions!

For more information, click here or contact Alicia Green, Director of Education and Community Outreach at agreen@anoisewithin.org or 626.356.3104.