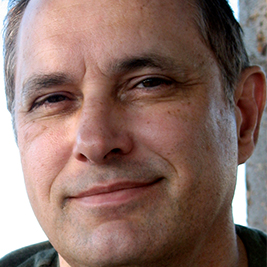 His first association with ANW was with As You Like It in 2007, when Robert was brought into the fold by director Michael Michetti (who directs this season’s buoyant Figaro).  He admits, with refreshing candor, “The old building was fascinating in some ways, and frustrating in others. I was impressed with the company, though, and with their consummate professionalism.”

Robert’s blend of musicological and technical experience helps our shows sing. “Mixing music is a thrust space is challenging because you want to make it sound good for everyone, regardless of which section their sitting in. For example, if you’re seated in the far house-right section, it’s likely you’re only ever going to hear music through the house-right main speaker, because the house-left speaker is simply too far away to hear it. So you’re only hearing half of the stereo field. If you’re in the middle section however, you’ll hear both main speakers in stereo, as intended. Now, for Figaro, I’m trying something new. I’m sending the same mix through the house-rear speakers, reversing the stereo fields and compensating for the inherent delay between the front and rear pairs. This way, no matter where you’re sitting, you hear the entire stereo field.”

Robert offers an interesting philosophical perspective on the role of music in a dramatic play. “Of the two senses we possess,” he says, “we bring only two with us into the theater. So sound has a huge impact on how we take in a play. It can underscore, punctuate, be an event unto itself, be almost imperceptible, or loud enough to shake the rafters. It is, essentially, another character in the play. When done right, music helps move things along, makes a point, allows us to change directions, and heightens the action taking place onstage.”

He also shares his point of view on musicianship:  “It’s always rewarding for a musician to have the opportunity to simply play their instrument well. In this computer age with so many instruments being ‘virtual,’ we lose sight of what it takes to actually play something live, in front of living breathing people. The Grapes of Wrath allowed me to brush up on steel-string acoustic guitar, which is an instrument I’ve always loved but rarely have chance to play, since my guitar work is mostly classical in nature. For The Threepenny Opera, however, I’m playing classical guitar, banjo, double-bass and slide guitar, so the time I spent making sure I was up on all those instruments was challenging, yet fun.  Also, the scope of The Threepenny Opera brought up the need to upgrade and enhance our existing sound system. We now have a new mixing board and many more microphone capabilities than we’ve had for prior shows. I enjoyed helping to spec out and build this new system. The last project at hand is to upgrade our speakers, which is something I look forward to working on next year.”

What’s next on this multi-talented artist’s horizon?  “At this point I can’t see beyond Julius Caesar,” he laughs, “but I always look forward to composing music different from any that I’ve done before. A Noise Within seems to keep those opportunities coming.”
For more information on Robert or any of our Resident Artists, please click here.