Have you met Claude?  Watch how ANW Resident Artist Rafael Goldstein  transforms into the wacky character for our production of Molière’s The Imaginary Invalid. Then, read on to learn about how Rafael prepared for this role and how working as an actor has improved his makeup skills.

Describe the process of creating Claude.

I found out early on from Julia [Rodriguez-Elliott, Director] and Angela [Balogh Calin, ANW Resident Costume Designer] that they had found an image from a 17th century medical book. The straps across my face were a real thing that people would use to treat migraines – give your head some pressure and hold the brain in place. The text gives Claude’s whole life story, which is a unique gift. Dr. Purgeon [played by Jeremy Rabb] describes how Claude couldn’t speak until he turned seven and when he did, they sent him to the barn. Why would you send anyone to a barn unless that person sounds absolutely insane? These textual elements gave me clues I needed to create this personality, but the costuming really solidified those ideas for me. 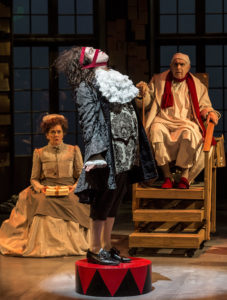 How do you prepare for a performance?

I stretch! I have to warm up because this show is an athletic event. We are all doing really physical stuff.  Claude, in particular, has been an exercise in stamina and concentration. It’s a 100 meter sprint the whole time, and it requires a lot of focus and preparation and articulation before and throughout. Physical and vocal warm ups are essential, and going over your lines… because this show needs to move like a train once it starts.

This season you are in two shows with us that are playing at the same time – The Imaginary Invalid and Arcadia. What is the repertory experience like for you? Is it hard to transition between Septimus Hodge, an extremely intelligent tutor, and Claude,  a chicken-like “medical specialist”? 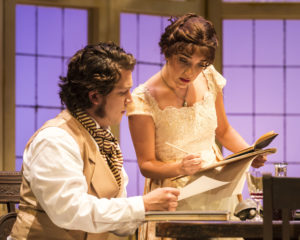 Well, they are so distinct. They’re not even in the same universe, so it’s hard to get confused. I feel like each character can feed the other.  Septimus is very contained, and physically somewhat reserved. Being Claude helps me get out of my head and more into my body and, just by virtue of doing one show right after the other some weekends, makes Septimus a little looser. And vice versa, working with Septimus helps make Claude a little clearer. Everything that you are working on helps inform whatever else you may be working on.

Have you gotten better at doing makeup since you’ve started acting?

Yes, yes, you have to! I played a clown in a show at redwhite+bluezz  so we had  to do a lot of makeup. Luckily, there was a woman there who was a professional clown so she helped us a lot. I was pretty useless because it was such a specific style of makeup… Luckily for this show, Claude’s look can be much more slapdash and haphazardly pulled together, because Claude is a slapdash kind of person.