Home | Behind the Scenes | Gem of the Ocean First Rehearsal Recap

Before first rehearsal for Gem of the Ocean began, Director Gregg T. Daniel invited Choreographer Joyce Guy to help him perform a libation ceremony. Joyce Guy, with dangling earrings shaped as the African continent, followed after him as he poured wine from a gourd on each of the four corners of the room. As they walked, she recited a libation prayer to thank and invoke the ancestors, a prayer that everyone in the room echoed with the word “Ase.” Once the ceremony concluded, Daniel stood in front of his cast and said, “Memory insists that we go back and claim the past.” He explained that this day, August 20, 2019, marked 400 years since the first slaves arrived in Jamestown, Virginia, and he couldn’t think of a better way to claim the past than with Gem of the Ocean, set in 1904 Pittsburgh shortly after the Civil War and Emancipation. 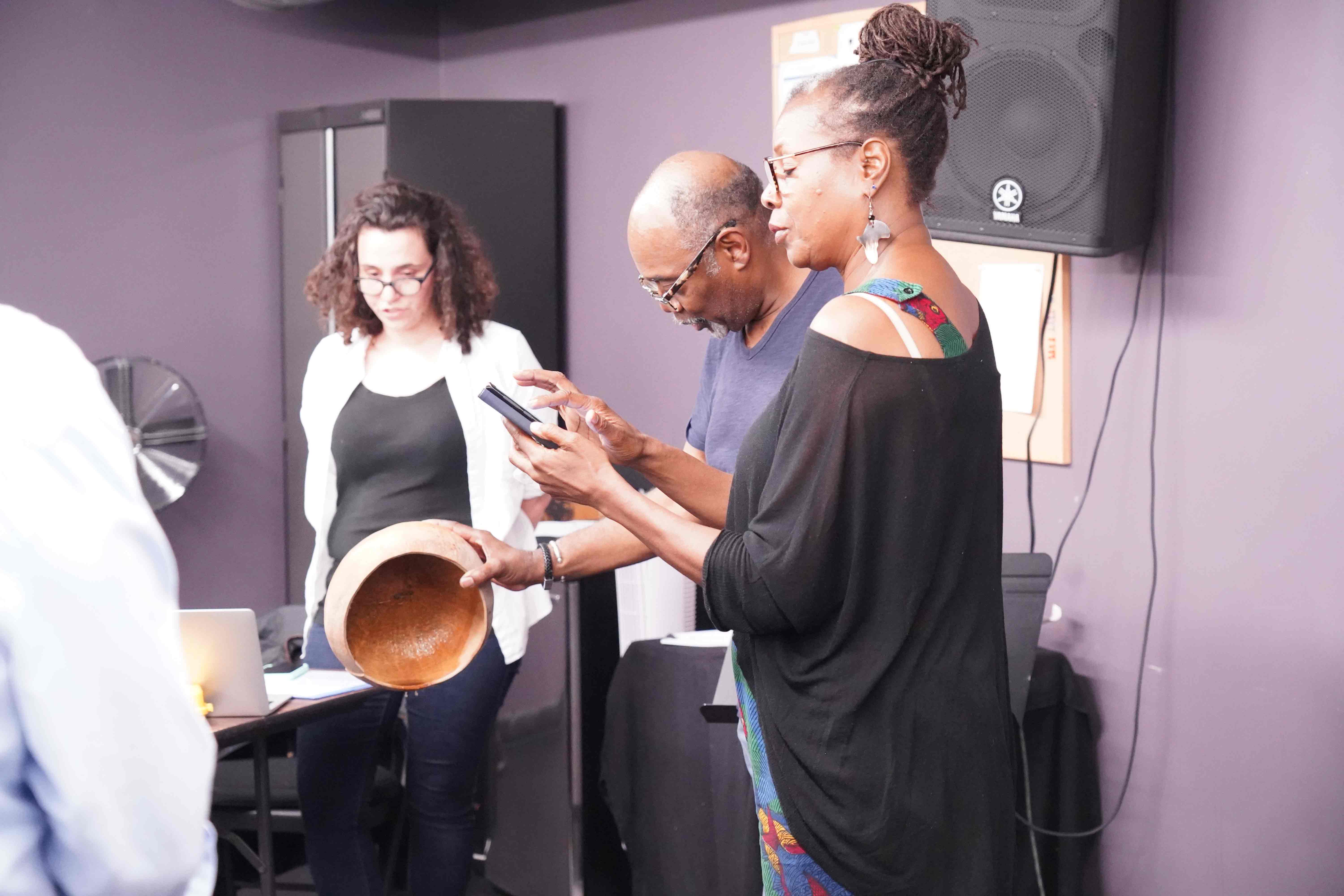 Gem is the first chronological episode of August Wilson’s American Century Cycle, a play series of 100 years of the African American legacy that A Noise Within hopes to produce chronologically in its entirety. The cycle includes one play per decade of the twentieth century. Daniel was especially excited to mention that when he directed A Raisin in the Sun here in 2018, American Theatre had named it one of the 10 most produced plays of the 2017-2018 theatre season, and as he came back to direct Gem of the Ocean, August Wilson was named one of the 10 most produced playwrights of the 2018-2019 theatre season.

The first presentation came from Sound Designer Martín Carrillo, whose work most recently appeared at ANW in the hit musical Man of La Mancha. Gem‘s sound design incorporates traditional and modern sounds and will mix recordings and live improvised vocals and found instruments. As a demonstration, Carrillo clacked two spoons together in an uneven rhythmic beat (“I’ll get better at this,” he joked), explaining that many sounds will come from found materials and everyday objects like the spoons. Carrillo also played a sample of a soulful rendition of a song about the mythical City of Bones from the play. “It’s all for you to improvise and build on,” he told the actors. 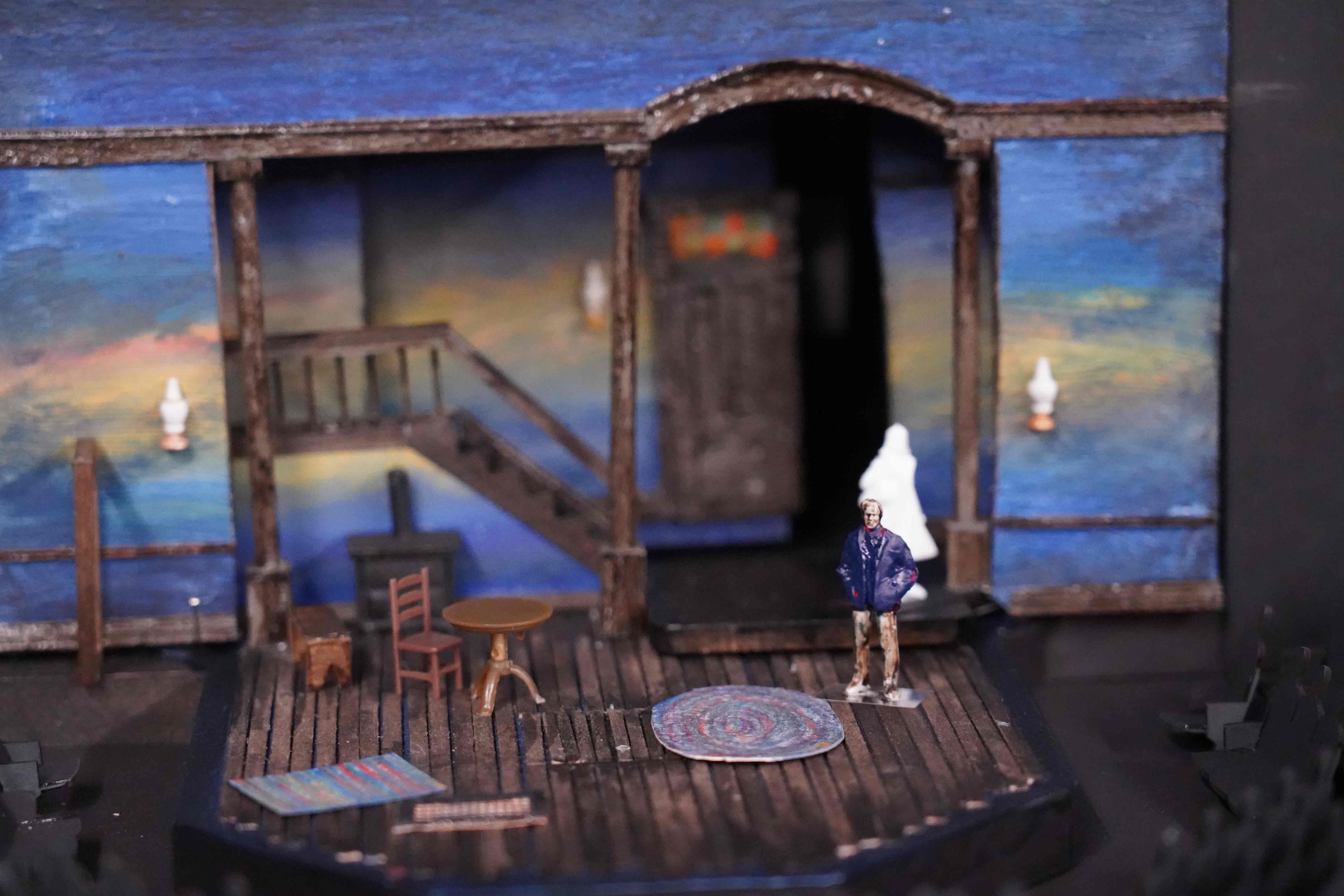 Gregg T. Daniel presented Stephanie Kerley Schwartz’s scenic model, demonstrating the large door (“a portal between different times: past, present, and future”) that will fly in and out of the set, along with the sky drop and other set transformations during the journey to the City of Bones. Joyce Guy’s choreography will also contribute to the transformational journey; the actors’ movement, steeped in tradition and ceremony, will express the characters’ ancestral memory from their parents and grandparents’ dance rituals. The Lamban and Ngri dances will pay homage to the ancestors, to the harvest, and to the motherland.

As for costumes, Resident Artist Angela Balogh Calin incorporated the motif and colors of the ocean, made especially obvious by the lineup of deep blues and purples and greens across the costume sketches. “Water is all throughout the play,” explained Daniel. “Water is also healing.” The costumes also promise to be moveable, as the actors will be doing a lot of dancing. Make-Up Designer Shannon Hutchins said that make-up will be simple for the show, although it may include small prosthetics for Aunt Ester’s age makeup (not a lot of 285-year-old soul cleansers as a visual reference, unfortunately).

Following the presentations, all the actors settled into their characters for their first official reading of the play; immediately they established the camaraderie of old friends, the blessings of a wise soul cleanser, and the scars of warriors of freedom. Great promise lies ahead for Gem of the Ocean, coming to our stage on September 22, and we look forward to commencing Wilson’s famous American Century Cycle.

Get tickets to Gem of the Ocean!