“Who here has read Mary Shelley’s original novel Frankenstein?” This was Director Michael Michetti’s opening question to the cast and crew at Frankenstein‘s first rehearsal. Some hands went up, but some didn’t. “That’s okay, you weren’t expected to,” said Michetti. “Not everyone has read it, so there are a lot of misconceptions about the story.”

Michetti described Nick Dear’s adaptation as true to Shelley’s novel, although it’s unique in that it’s from the Creature’s point of view. We learn what the world is and what the story is through the Creature, who grows to be a well-read, sensitive, and thoughtful being. It was only the later adaptations that turned the Creature into the mumbling, mindless squarehead with bolts in his neck.

“This is a character who is born innocent and becomes violent because the world teaches him to be,” said Michetti, who saw a real-life parallel with any person whose cruel mistreatment transforms into both personal defiance and societal condemnation. This universal human experience evokes sympathy for the Creature, so much so that the audience won’t know how to feel when he turns to violence; on one level you root for it because you want to see his revenge, but on another you want the Creature to act as his higher self. “This story is about the fear inside, rather than the fear outside,” Michetti said. That’s not to say there won’t be scares – it’s Frankenstein after all – but Michetti promised they would be earned, instead of the cheap horror movie jump scares.

After Michetti finished his introductions, the designer presentations began. Scenic Designer François-Pierre Couture emphasized mirrors as a major motif, pulling from the novel’s themes of reflection and perception. The Creature will be “born” from a box of two-way mirrors, with lights aggressively invading the space from above and below and all sides until the Creature bursts free. Throughout the show, mirrors will pop in and out of the space, haunting the Creature wherever he goes.

Costume Designer Garry Lennon talked about the challenges of designing for this era. Although the scenic and lighting design will be gestural, the costumes will be literal period pieces. In Mary Shelley’s time, modern medicine and science had not developed much past “quackery.” “There is no surgical gown in this time, so I have to imagine how it would look,” Lennon explained. The play’s theme of reflection continues with the aesthetic transformation of Victor Frankenstein and the Creature. The Creature will begin as primal, but as he becomes more and more human, Victor will become more and more animal.

Next, the dynamic duo of Wig/Makeup Designer Shannon Hutchins and Creature Makeup Designer Angela Santori discussed their approach to the characters. Since Resident Artist Erika Soto is playing both Victor’s fiancée Elizabeth and the Female Creature, the two brides will echo each other in the ethereal beauty of a “mystical woman.” As for the Creature himself, Santori was excited to play with various colors and textures to create the scarred, discolored look of a man made of different body parts. “I ask myself, how did this body originally die?” Santori said. “Does he have a really old wound from that? Was he hung or stabbed before?” One callback Santori wanted to make to previous Frankenstein renditions was to include electrical burns on his skin.

For the last designer presentation, Resident Artist Robert Oriol played samples of his orchestral music compositions, including the dark foreboding music for the top of the show for the Creature’s birth. Finally, Movement Director Rhonda Kohl and Director Michael Michetti recounted their “Creature Week” – a week of early rehearsals that they previously held with Michael Manuel to explore the Creature’s movement. They drew inspiration from watching how babies learn to crawl and how adults recover from strokes or other serious medical incidents.

Once the reading began, it was clear Michael Manuel had been polishing all his Creature sounds and speech, from the groans to a perfect recitation of Milton’s Paradise Lost. We can’t wait to see the full effect – lights, sound, costumes and all – when the show opens this summer.

Performances begin on August 11. Tickets to Frankenstein are available now! 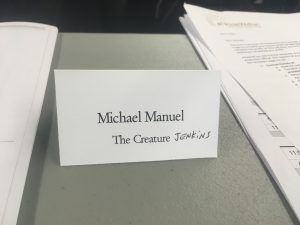 BONUS: An inside joke between Michael Manuel and Tania Verafield, who starred as Iago and Emilia in Othello last season, was that their characters’ last names should be Jones. The joke continues, except now their last name is Jenkins. See Creature “Jenkins” in Frankenstein!