Home | Behind the Scenes | First Rehearsal Recap: The Winter’s Tale

“Does not the stone rebuke me for being more stone than it?”
– The Winter’s Tale, Act V Scene III

Our production of The Winter’s Tale streamlines to the core story of Leontes, who transforms from an egocentric paranoid king who builds monuments to himself, to a humbled man who wants nothing more than reconciliation. At our first rehearsal of The Winter’s Tale, Director Geoff Elliott said: “We start with chaos and loss, but ultimately this is a play about love, unification, and forgiveness. It’s about people, after many years, coming together and moving on from tragedy – which feels like the uplifting story we need to hear right now.” 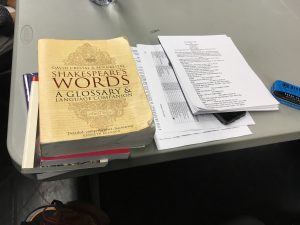 Scenic Designer Frederica Nascimento hinted at how she has already been uplifted by the play. “I don’t laugh too often, but this play really has some clever moments,” said Nascimento. Of course, the play does not begin in high spirits. Leontes’ kingdom of Sicily, as Nascimento described, is a surveillance state: watched, controlled, efficient. “Think Mussolini’s Italy in the 1920s,” said Elliott. From marble flooring to a prison-like crib to movable walls and staircase units, the scenic design evokes the severe discipline and cold environment that Leontes builds. The scenic design draws inspiration from the memorial to victims of communism in Estonia, a memorial that is full of beauty and mystery but also an eeriness.

We next enter coastal Bohemia – a hopeful world of lush greenery. During the personified Time’s monologue about the passage of 16 years, the actors will sweep a large deep green fabric over the stage. “It’s going to take all of us to do it – specifically you,” joked Elliott, pointing to Resident Artist Jeremy Rabb. “Bohemia is more relaxed. Leontes is respected and feared by his kingdom, but his friend Polixenes is respected and loved.” When we return to a much softer Sicily, Leontes will be kneeling before the monument of his wife and son. No more military dress. No more political posters. Just one man, desperate for forgiveness. When Hermione appears as a statue sitting on her throne in the finale, her brightness will create a palpable sense of hope after Leontes’ years of darkness. 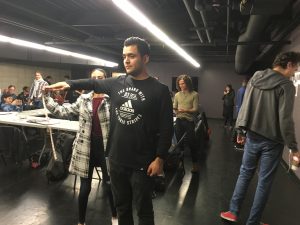 The cast gets measured for costumes.

Meanwhile, Costume Designer Garry Lennon also plans dramatic visual cues to Leontes’ and the play’s transformations. We begin in Sicily with sleek 1920s dress in dark colors, but in Bohemia we experience an explosion of bright colors and textures and flowers. “I’m making up what a sheep shearing festival looks like in Bohemia,” said Lennon, “because the real sheep shearing looks pretty boring.” After his death, the young boy Mamillius will wear a brown bear costume as he acts as a quiet otherworldly guide to the other characters, until he transitions to a white bear costume in the final scene as he finally passes on to the spiritual realm.

Sound Designer Jeff Gardner started his presentation by saying: “The Winter’s Tale is my favorite Shakespeare. I don’t know what that says about me.” Several cast members laughed. “The language is beautiful. The story is so human. Exploring what happens when a man takes the disease to the extent that he does is fascinating.” Gardner is partnering with New York-based composer Ellen Mandel. “With Leontes, we’re giving the idea that everything is right on time and just so,” continued Gardner. Much of Sicily’s sound includes percussion and snare drums, along with dark violin. As Gardner played the piece for Sicily, precise percussion marching along deep oceanic violins, eventually transitioning to Bohemia’s lighter stringed instruments – and a sudden baa from a sheep, much to the cast’s amusement.

Finally, Geoff Elliott reaffirmed his excitement to revisit The Winter’s Tale after directing it years ago. The forward momentum is Leontes’ story, which Elliott primarily focused on when streamlining the script.  “What I want to create is an ultimately spiritual and inspirational story, with new moments of levity and magic.”

Tickets to The Winter’s Tale are available now.