Home | Behind the Scenes | First Rehearsal Recap: Alice in Wonderland

Ours is an Alice in Wonderland that you will both recognize and be surprised by – a quirky children’s fable with astounding logical and illogical prowess, intelligent humor, and a marvelous metaphysical exploration of growing up. At the beginning of first rehearsal, Director Stephanie Shroyer expressed her enthusiasm to revive and rethink Lewis Carroll’s entourage of eccentric characters. “We’ve agreed to reinvent the rabbit hole,” said Shroyer. “We have our work cut out for us, just like Alice.” The palpable creative energy in the room promised that the cast and the designers were game to discover a multitude of new things about Alice in Shroyer’s vision.

Like many fairy tales, Alice gives us permission to remember our childhood and enjoy the little things that delighted us when we were young while still exploring mature ideas and philosophies. “This was the first children’s book to be written without a moral,” continued Shroyer. Carroll didn’t set out teach or preach anything, but he did poke fun at it. As an example, Shroyer quoted a line from the Duchess as she’s talking to Alice: “I can’t tell you just now what the moral of that is, but I shall remember it in a bit. Everything’s got a moral, if only you can find it.”

Moving on to the scenic design, Shroyer explained how John Tenniel’s illustrations for the original Alice books provided much of the inspiration for her and Resident Artist Scenic Designer Frederica Nascimento. Although the story begins with Alice in Victorian England, the setting will quickly tumble into the upside-down world that makes Wonderland. Stairs that lead somewhere and nowhere at the same time. Ladders dressed in tree costumes. A life-sized chessboard. Everything is backwards through the looking-glass, a visual effect that will make magnificent magic onstage.

Meanwhile, Resident Artist Costume Designer Angela Balogh Calin was brimming with excitement to delve into the Wonderland characters. “If the set is minimalist and abstract, the costumes are nothing like that,” said Calin. “Everything is alive, whimsical, colorful. The renderings look like children’s theater, but they will have a serious edge to them too.” Like the scenic design, the costume design for Alice takes visual cues from the Tenniel illustrations but pushes them a step forward to be more theatrical. Another challenge to the costumes is that only eight actors play quadruple the amount of parts. Nothing that Calin (or the cast) aren’t ready for. The fanciful whimsy will not end with the costumes. Assistant Wig/Make-Up Designer Angela Santori promised fun facial hair, wigs, hair pieces, hats, and more for the cast to wear – keeping in mind the need for quick changes, of course. “It will be easy for you, but fun for everyone else,” said Santori. 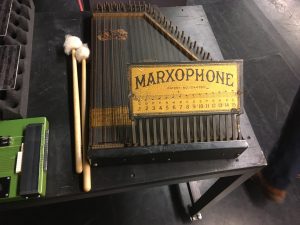 Josh Grondin, who is in charge of original music and sound design, began by saying that Alice is a very big palette for him to work with. “I’m taking a lot of actual instruments and bringing them into the digital world to stretch out the sound. I think, ‘What’s the most whimsical, weird thing we can find?'” As an example, he introduced the cast to the marxophone, a stringed instrument that has what he called “a magic sound.” Director Stephanie Shroyer interjected, “Josh’s studio is like a music wonderland!” Grondin played the opening number for the play called “The Boat Song” – a song reminiscent of a children’s lullaby, soft and sweet, but also haunting just underneath the surface.

Before the first reading commenced, Shroyer made one last disclaimer to the cast about their multitude of roles: “Sometimes you’ll be talking to yourself – we’ll figure out how that works as we go.” With that, Resident Artist Erika Soto brushed up her English accent and soon embodied the adorable seven-year-old Alice, ready to enchant her audience with Carroll’s breathtaking coming-of-age tale.

Tickets to Alice in Wonderland are available now.