Home | Behind the Scenes | Raisin is in Rehearsals

Raisin is in Rehearsals

First rehearsal: the moment that sets our show’s production into motion. The director, the designers, and the actors gather in one room for the first time to visualize how they want to bring the show to the stage. Everyone gets a taste of each other’s ideas and begins to connect different areas of production into a cohesive, compelling narrative.  After the designers share early models and concepts, the actors give voice to the characters through a table read, sparking excitement on all sides for what’s to come.

In early January, Geoff and Julia held the first rehearsal for Henry V, where they revealed special production elements like a live percussionist, a fight choreographer, and a chorus of war-torn men on stadium seats that will create a thrilling adventure about the cycles of warfare and humanity’s addiction to conflict. Last week, Gregg T. Daniel assembled his cast and crew for the first rehearsal for A Raisin in the Sun, a thoughtful depiction of an African American family in a cramped Chicago apartment in pre-Civil Rights America.

Although it is a historic hallmark of theatre, Raisin is not just a story from the past.  The Younger family’s dream for a better home and for a better life—as much of a struggle now as it was before for families of color—continues to resonate with contemporary audiences. Gregg plans to make our production of Raisin feel as gripping, as timely, as relevant, and as human as it felt when it premiered in Broadway in 1959. Scenic designer Stephanie Kerley Schwartz says, “[Gregg and I] worked hard to honor the needs of the play, the time and place, and yet not create a nostalgic world where the audience relaxes into thinking these problems are just in the past and we no longer have to worry about these issues today.”

Every aspect of the show’s design—from the struggling light through a kitchen window to encroaching city buildings—will feed into the palpable claustrophobia that the Youngers, particularly the protagonist Walter Lee, feel in their tiny, worn down apartment. Meanwhile, choreographer Joyce Guy will incorporate fanga and traditional Nigerian dances to give physicality and rhythm to the play’s exploration of Pan Africanism. From the first read, the cast has already infused the characters with humor, emotion, and authenticity that will pull you in from the moment we draw the curtain. You will dive deep into the Youngers’ world, to hear what they hear and feel what they feel as their family approaches a boiling point, holding desperately to dignity and hope in a hostile world.

Raisin‘s rehearsal was the first time we had Young Adult Council members attend the first reading. The students were surprised and in awe of the amount of work that goes into the production even before the first reading, from the model designs, to the dedication from the entire company. They also were so impressed with the actors and could not stop talking about how in depth they already seem with their characters. They can not wait to see the production come to life and to see the growth from the very beginning.

The Young Adult Council is thrilled about Lorraine Hansberry’s groundbreaking play coming to our stage, and we are too! 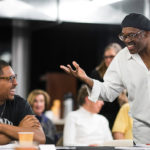 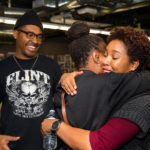 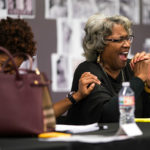 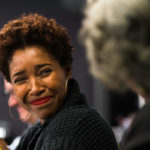 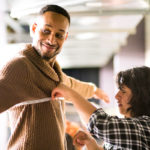 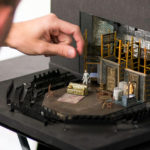