The main intention was for me to learn more about what theatrical production involves…I don’t think there’s really another way to figure that out. I would imagine most of our donors don’t realize what goes into it.

Becoming a Production Sponsor is an incredibly special experience offered at A Noise Within.  Not only does it help to underwrite the production costs of a play, it also creates a unique relationship between the artists and the sponsor. 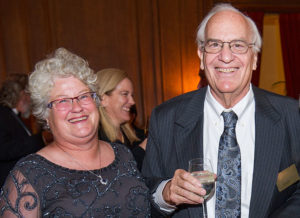 Dick Roberts (Board member at ANW) and his wife, Sally, chose to sponsor The Madwoman of Chaillot during the Fall season at ANW.  Dick viewed the opportunity to sponsor the production as a learning experience to gain a greater understanding of how live theatre works.

We had the opportunity to sit down and ask Dick a few questions, read on to learn about his experience.

Q: What inspired you to sponsor a production at A Noise Within?

A: In a previous conversation with Geoff and Julia I heard that if I sponsored a production, I could sit in on any stage of the production. In other words, from the beginning, and that is the reason I wanted to do it.

I know a lot about music – our foundation sponsors music programs around the world, literally. I’ve loved theater all along but I really didn’t know what went in to it. I figured it was more than meets the eye. How much more, I didn’t know.

The main intention was for me to learn more about what theatrical production really involves. Now that I’ve done that, I don’t think there’s really another way to figure that out. I would imagine most of our donors don’t realize what goes into it. 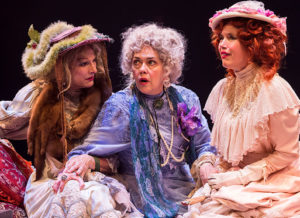 Q: What drew you to The Madwoman of Chaillot?

A: I met with Geoff and Julia to discuss why they chose Madwoman.

We chose to sponsor it without much information, just a little blurb that made it clear it’s a story about these women who take control, who take power. My wife was a feminist from the ’70s on, so…it’s important. I don’t think I had even heard of Jean Giraudoux.

I just had no idea that the director had to be so keenly aware of the scene, position, the placement of everything, the actors and the audience, and the setting.

Q: How has becoming a sponsor allowed you to participate in the production and rehearsal process?

A: I went to the first rehearsal of the first act and Apollo [Dukakis] said to me, “You watch Stephanie. She’s very much into movement.”

You can see from the production, and you could see it in the rehearsals – it’s not only the people that are talking. She wants constant motion. I guess that’s the choreographer that’s inside of her. It was critical.

They did one scene – it’s the scene at the very beginning with the Sargent, where they pick up Rafael [as Pierre] and they argue with the doctor over what should be done. It’s a very short scene, but they did it at least 12 times. Each time, a little different. And you just realize the talent of these people, that they could do this with such agility.

Q: What have you learned through this experience? 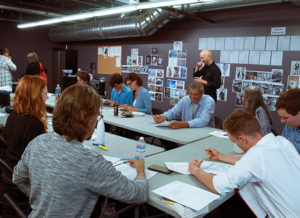 The cast of The Madwoman of Chaillot at their first rehearsal.

A: I met with Stephanie and Deborah. That was flabbergasting, because Stephanie is amazing. You can look at her resume to see all the credits, awards, and prizes she has won for directing and choreography.

She laid pictures and photographs of cafes across a couple of the tables and explained how she has to think about where each actor or actress stands in relationship to the theatre, because they’re viewed from all sides. But also, just as importantly, how they are viewed in relation to the cast, because they’re talking to the cast.

She had diagrams of prospective sets. She had the stairs in mind from the very beginning and had ways of making it appear distant. I was just shocked. That was really amazing. I just had no idea that the director had to be so keenly aware of the scene, position, the placement of everything, the actors and the audience, and the setting.

You have to really understand theatre to see how the scene of the Madwomen in the second act could actually work. And it works phenomenally. It was carried off with great aplomb.

Q: What has been the most rewarding part of this experience?

A: It made me realize in a much more profound way, why when you go to A Noise Within, it’s so magical. It’s because they work, there’s blood, sweat, and tears. You’ve got to be in tremendous physical shape to do those rehearsals. During rehearsals at one point, I heard Deborah say she was sick, but she didn’t miss a beat. And that applies to everyone. Working with Stephanie was a joy, we had lots of fun.

Q: Would you recommend this experience to others?

A: Of course! We’re going to do it again, that’s for sure.

A special thanks from all of us at ANW to Dick and Sally Roberts for sponsoring The Madwoman of Chaillot. Thanks as well to our fall sponsors (Terri Murray-Lead Sponsor, John and Barbara Lawrence, Anni Frandsen Low Ph.D.-Co-Sponsors for A Tale of Two Cities, and Chris Burt and Tieu-My Nguyen and Margaret Sedenquist- Co- Sponsors for Mrs. Warren’s Profession).

You too can sponsor a production at ANW.  If you are interested in becoming a production sponsor please contact Amy Nance, Development Director atanance@anoisewithin.org or 626-356-3103.