Home | Behind the Scenes | Asked and Answered: King Lear Projections

We’ve pulled together a few of our favorite questions from the post-show surveys about the projections in King Lear, and asked our projection designer Dave Mickey to tell us about the design process and how the visuals came together.

What was the design process like?
It was a collaboration among Julia, Fred (Kinney, scenic designer) and me. I was brought in to help support Fred’s set design and fulfill Julia’s vision of the play. We talked through the play scene by scene and brainstormed on content ideas while creating a cue sheet. All of the content was rebuilt during tech as we collaborated and fine-tuned the final images. It came down to what read on stage to help tell the story. 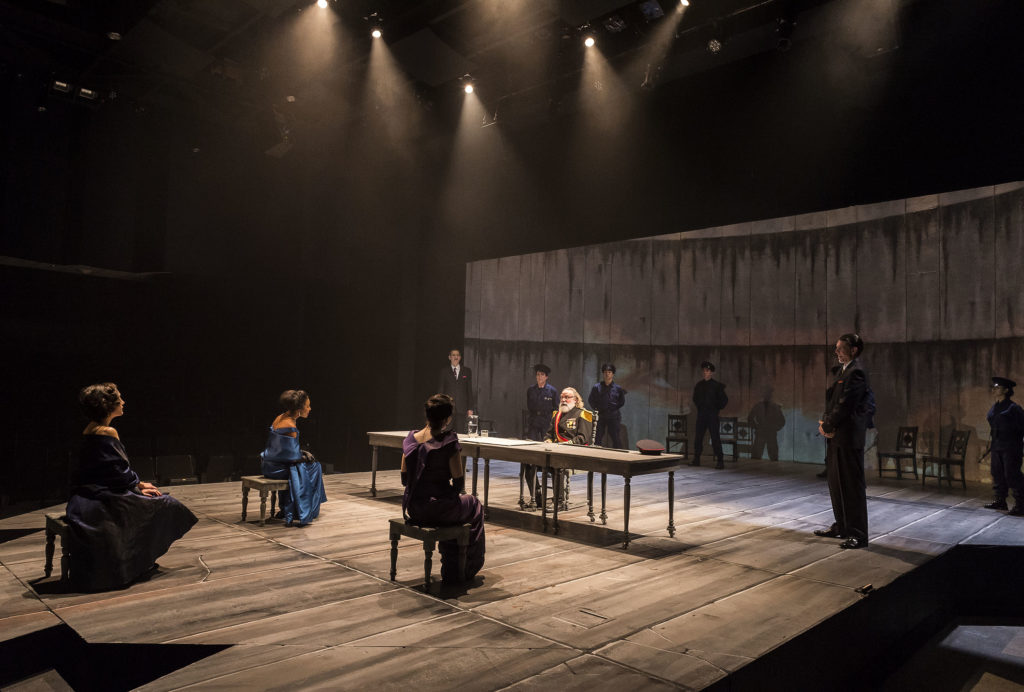 What was the concept behind opening the play on the very powerful first image of King Lear’s eyes?
The original idea was to have Lear’s face on the center two doors as a portrait after everyone enters the room. Once we were in the space, the projection did not read well from the house. We experimented with the photo of King Lear’s face and liked how the face filled the stage – Lear was always watching even when he wasn’t in the room. Eyes became a theme and come back later in the show as Lear watches from the dark.

Julia wanted a wall of blood to end the Act as a ‘curtain’ dripping down until the end of the scene. What you see is four different videos of black paint dripping, pouring down a wall and digital colored to look like blood. It’s about 60 layers of blood pouring down the wall to fill the space over 2 minutes in time. 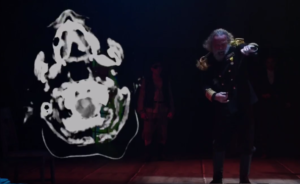 How did the setting and modernized aspects of the play inform your decisions of what images or colors to choose for the projections?
It’s all about what reads on stage, that’s why the tree is white, and the blood is filmed paint and digitally colored pink. What we see reflecting back to our eyes from the set is not the same as what is being projected out. The elements of the space change the physics of the projected design.

Did the images and videos of MRI scans show the brain of an actual Alzheimer patient?
Yes they did. The brain images came from different Alzheimer research groups. The first time we see the MRI scan moving also foreshadows the final battle of the neurons battling and dying off one by one. 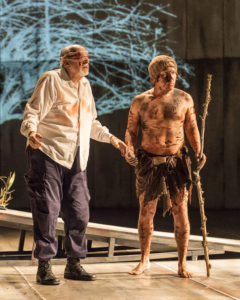 Which projection do you think was most successful?
I think it was the tree leaves flying up as one character leaps to their death. It was a fun and challenging cue to create and had many versions during tech. Then it faded into a tree which was a photo Fred [Kinney] took in North Carolina the week before.