Home | Behind the Scenes, Company | Asked and Answered: Ah, Wilderness!

We always get amazing responses from you in our post-show surveys! With the season in full swing, we thought it would be a perfect time to have our Ah, Wilderness! cast answer some of your questions.

How did your understanding of O’Neill influence your character?
Alan Blumenfeld (Sid Davis): Ah, Wilderness! is O’Neill’s idealized vision of what he wished his family had been, and he had to offer a realistic glimpse into his real life by including the hilarious, sad man – Uncle Sid.

Deborah Strang (Essie): I almost had to erase my knowledge of O’Neill to arrive at Essie! I know that this is the family he wished he had, so she is almost the polar opposite of the mother in Long Day’s Journey. Much of the dialogue is similar in each play, but the perspective is so changed. The greatest difference is that Essie is full of joy and the mother in Long Day’s is full of regret.

How did you work with the slang and rhythm of the play? Do O’Neill’s plays require a particular type of cadence? 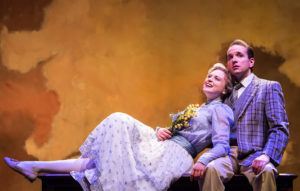 Matt Gall (Richard): O’Neill absolutely requires a specific cadence because he wrote with a rhythm and a vernacular that were of their time, but entirely his own. The key to syncing up with this rhythm was spending a lot of time stripping the modern-day irony from my regular speech and infusing it with the sincerity he put on the page. Richard is strikingly honest and wistful, and I had to learn to take his words at face value.

Emily Goss (Muriel McComber): “O’Neill” is definitely a language. For me, it was more daunting to get behind the honesty and the sense in this dialogue than Shakespeare. That’s because the characters here, Muriel especially, are so intensely honest. To speak her way, I had to find out how to think and feel her way. O’Neill specifically (and helpfully) punctuates his text, giving you clues as to those thoughts and feelings – if you obey him, he’ll also take care of the rhythm for you. Basically he’s brilliant and it is a joy to be in a play of his.

Were you actually playing the piano during the play? Can you tell us more about how you connected to the music in the play?
Katie Hume (Mildred): I actually was playing piano during the show! Of all the songs at the piano, only one is pre-recorded (“By the Light of the Silvery Moon.”) The rest are played live every show by myself and Nicholas, who plays Nat. O’Neill intended for almost all of the songs you heard to actually be in the show, and it’s incredibly exciting to bring to life his exact visions for the music. It’s fascinating how much these songs influenced more modern music that we know and love today.

How difficult was it to be Norah, with all of the choreography of moving trays and people?
Kelsey Carthew (Norah): Most of the difficulty lies in maintaining the timing of it all – to make sure that I do something at exactly the right time so it sets up a laugh or buttons a moment. The gift of that problem, as an actor, is that negotiating the timing of the movements always keeps me in the moment, present, and connected with my fellow actors on the stage. It’s a real delight.

Thank you to everyone who submitted questions during our post-show survey. If you haven’t seen the show yet, tickets are still available. Click here to book now!