A Note from Geoff and Julia 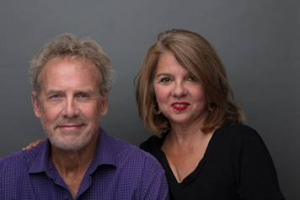 Over time we began to realize that there was more – much more – to what we were doing than just the work. We began to meet and get to know folks just like you. We were given the opportunity to be a part of the community and (with your help) to create one of our own. We became friends with so many good people who we otherwise never would have met. Over time, we discovered that this was the real reason for the creation of A Noise Within – the productions were simply a conduit to you.

Best wishes for the new year,

Other ways to donate:

Shop through Amazon Smile to support A Noise Within!

Consider making a lasting gift and naming one of the seats in our theatre! Contact Development Director Patti Anne Miller at 626-356-3103 or via email at pmiller@anoisewithin.org for more information.

The Pension Protection Act of 2006 created the IRA Charitable Rollover, allowing owners aged 70 ½ or older of traditional and Roth IRAs the ability to distribute directly, or “rollover,” to certain public charities (including A Noise Within) up to $100,000 per year without the distribution being included as taxable income, but allowing it to count towards the annual mandatory withdrawal. In 2016, with the Consolidated Appropriations Act, Congress made permanent qualified charitable distributions from IRAs. These distributions may count toward your Required Minimum Distribution but may exceed that amount if less than $100,000. The potential tax savings is available both for donors who itemize and for those who do not.

In recent years, many donors have taken advantage of this legislation (which is now permanent), benefiting not only themselves, but several local charities. A Noise Within began offering this opportunity a few years ago and several donors have utilized this great vehicle for making their annual gift. When you make your IRA distribution, you can make it directly to A Noise Within and avoid any tax penalties. You may designate the distribution for a specific use at ANW, including the Production Fund, the Artistic Fund, or the Education Fund.

If you would like to take advantage of this opportunity to benefit A Noise Within, please contact Development Director Patti Anne Miller at 626-356-3103 or via email at pmiller@anoisewithin.org.

Learn about making a planned gift to A Noise Within here.