Home | Company | The Tiny Tims of Christmas Past

The Tiny Tims of Christmas Past 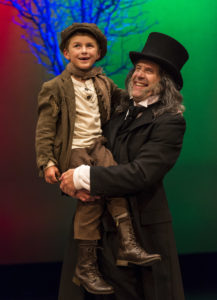 How old are you now/ how old were you when you played Tiny Tim?

Rigel: I am ten years old now. I was nine when I played Tiny Tim.

Theo: I believe I was just turning 11 when I played Tiny Tim. Actually, I was an understudy but I did get to perform in several shows which was pretty exciting. I’m almost 14 now.

Ikenna: I am currently twelve years old and I was ten when I played Tiny Tim.

Are you still pursing acting or anything in theatre? What are you involved in?

Rigel: Yes, I’m in A Christmas Carol again this year (Rigel will be playing a Cratchit Child!). Earlier this year, I was ANW’s Six Characters in Search of an Author and on a television show called Modern Family. 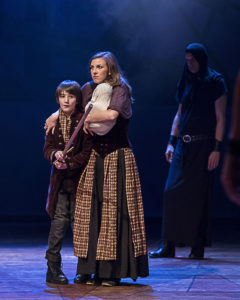 Theo: After understudying Tiny Tim I got the chance to play MacDuff’s son in A Noise Within’s production of Macbeth and also Puck in Inner City Shakespeare’s production of Midsummer Night’s Dream. Since my growth spurt I’ve been doing more film work—this past year I was one of the leads in Ira Sachs’ feature Little Men that premiered at Sundance. I’ve also been creating my own short films. But I love theatre and definitely plan on getting back to it when I get the chance.

Damaso: Yes. Earlier this year, I played Telegraph Boy in The Skin of Our Teeth at Artists Repertory Theatre in Portland, OR.  I will be in another play there in March 2017.

Ikenna: Yes, after the Christmas Carol I was a lead character in my fifth grade play, and I was part of a middle school drama production in sixth grade. Right now for my exploratory I am doing theater appreciation. I’m currently interested in various things. I play the piano, saxophone, and I am learning the guitar, I am a first class scout in Boy Scouts, I play basketball, and I’m apart of my schools choir. Thanks to learning how to improvise in drama, that experience helps me rebutting during my club debate practices and tournaments.

What is your fondest A Christmas Carol memory? 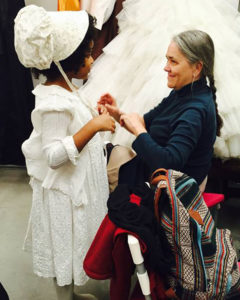 Rigel: My break room/nap breaks with Deborah (Strang), Jill (Hill), Allison (Elliott) and Megan (Farber). I don’t have any one memory but I enjoyed our girl chats!

Theo: A Christmas Carol is such a fantastic play and there is so much I love about it. The songs, the costumes, the story. My fondest memory is the “bread” pudding (aka vanilla pudding) we got to eat on stage which was delicious. A funnier memory, I remember I was a bit bigger than the regular Tiny Tim which made the final scene when Scrooge had to lift me up on his shoulder a bit of a weird suspenseful moment.

Damaso: I had a fantastic experience.  I loved sitting backstage and listening to the play every night and hanging out with Jack and Marie (my Cratchit siblings)

Ikenna: My fondest A Christmas Carol memory was eating pudding on stage every time we did the production. I especially love the fact that it was vanilla, my favorite. I also loved speaking in the British accent on stage and in dialect practice. The dialect coaches were awesome.Another good memory is being interviewed, seeing myself in the newspaper, and working on the same production with my twin sister Chize, the Cratchit girl.

Do you have any advice for the new Tiny Tim? 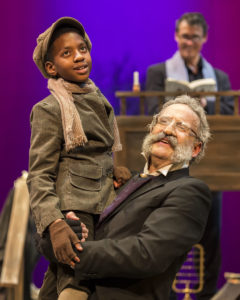 Rigel: Don’t be nervous because you’ll have more fun than you think. Also, listen to everything the directors say and you’ll do just fine.

Theo: Make sure your boots fit before you’re supposed to be on stage in them and have fun!

Damaso: Enjoy yourself and don’t think about the fact that you’re onstage when you are.  Think about what’s happening in the play though.

Ikenna: My advice for the new Tiny Tim would be to go out on stage and enjoy yourself while  working with an amazing supportive crew. To be ready for your cues, change your clothes in between scenes in a timely matter, and have fun with your solo. And never forget that Tiny Tim’s story is a story of hope and forgiveness.

This holiday season, join us for A Christmas Carol! Click here for tickets!