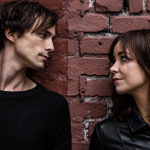 Will Bradley made his ANW debut in Figaro, about which Stage Raw wrote, “Bradley could hardly make for a more appealingly frisky Cherubin.” Now he takes on one of the stage’s great roles as Romeo in Shakespeare’s Romeo and Juliet. We talked to the Sautee-Nacoochee, Georgia native about the play and his role.

Will, when was the first time you read Romeo and Juliet?

I was a child when I first opened my father’s copy of Shakespeare’s plays from his set of the Great Books of the Western World. I didn’t understand every word but I remember being heartbroken by the lovers’ need for each other. I saw Baz Luhrmann ‘s film when it first came out and remember loving every moment of it. I can still watch it and learn new things from it.

Did you feel any connection to the character of Romeo on a personal level?

I connect to Romeo in that I understand what it is like to be a sensitive person at war with my own vulnerable nature. I had a very loving home with my immediate family, but growing up in the South was somewhat difficult for a person like me because it was a place that had very distinct definitions of what it meant to be a “man” or what words like “feminine” and “masculine” mean. I’ve always felt that one thing that is different about Romeo was his comfort in balancing his feminine and masculine qualities and I was grateful that my mother and father raised me to have a different understanding of strength and manhood.

Have you performed Shakespeare before? If so, who and where?

I have actually played Romeo twice, though I don’t think I had an inkling of what it was truly about. I’ve also played Puck; and my very first role was as Caliban in my high school drama class’s production of The Tempest. It changed my life to have to identify so deeply with a creature that was so despised. I think I’ve always had a sympathy for the monsters of the world.

To your mind, what are the most striking aspects of Romeo’s character; how does he speak to you?
Romeo speaks to me most potently through the shared admiration he has with Juliet. Through that, the lovers reach an equality that I don’t really find anywhere else in the canon. There is no misogyny or sexism between them. They meet and simply write poetry together throughout the play.

Will lived and performed in New York productions for three years until he ran out of money and was subsequently rescued by Michael Michetti’s production of Stupid Fucking Bird at The Theatre @ Boston Court. His livelihood has taken him from living in guest rooms of the mansions in Beverly Hills to sleeping several nights in his trusty Chevy Tahoe, Lonesome George. He would like everyone to remember that they are never more than two degrees from homelessness, and that the most-needed and least-donated clothing item at any shelter is socks. So donate socks—even if they don’t match. Follow him on Instagram and Twitter: @thewillbradley .

Romeo and Juliet is playing in repertory until May 8th. Please Click here for tickets.