You might recognize Carolyn from Tartuffe or The Importance of Being Earnest. Now, ANW’s newest resident artist shares a little more about herself. 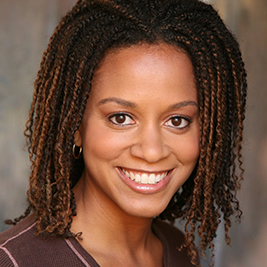 What inspired you to be an actress?

Two things come to mind:
1) A fellow classmate was cast as Macbeth in my 4th grade class’ production of The Scottish Play. With my 9-year-old temperament, I remember being more than a little sad that I was not cast in any type of a meaty role. That moment absolutely tipped me off to the fact that I cared more about acting than watching GI Joe and DuckTales after school.

2) In high school, I watched Zoe Caldwell play Maria Callas in the Kennedy Center’s production of Master Class. At one point, she crossed the stage in such a way that brought tears to my eyes. I was like, “Um…why did that just make me cry?” She held a power in performance that I hadn’t seen before. I was totally inspired to learn how to hold that much presence and truth on stage.

Simply put, when I perform and train in this craft, I find a unique freedom – a sense of family, and a power of connection. I love the serious business of playing and the playing of serious business. It’s all just been incredibly inspiring to me.

What does being a Resident Artist mean to you?

Wow, it’s an incredible privilege! It means being able to work and play with some of the most talented actors, designers, and directors and that is an absolute dream come true. Even more so, it means being able to have an artistic home; something I have wanted for a very long time.

What play are you looking forward to in ANW’s 25th Anniversary season?

Oh my goodness, all of them!

Do you have a favorite memory at ANW?

Yes! Geoff and I were in a performance of Tartuffe when we realized that the tablecloth, a crucial prop needed for the famous scene where Orgon hides under the table while Tartuffe tries to seduce Elmire, was not actually on stage. It was pretty fun to see Geoff make up verse off the top of his head while someone ran to get the prop.

What makes ANW different than other theatres?

My first production with ANW was Tartuffe. I was lucky to be in a show with mostly company members and it became apparent to me very quickly that I was working in a very special place. I knew that I was surrounded by craftspeople who had worked, played, laughed, and cried together over the years in their efforts to create a theatre home.
I think this is a unique place because of the legacy it holds, the legacy it promises – allowing new and established artists to play together and create a rotating rep. It’s rare to have a theatre dedicated exclusively to that, but ANW fits that bill.

What would be your “dream role”?

What’s the most unexpected place an acting gig has ever taken you?

Honestly, when I started acting, I had no idea how much this craft would illuminate my inner landscape. The principles needed for the craft of acting (i.e. Being in the Moment, Saying “Yes And,” Finding the Love in the Scene, Serving the Text) are actually amazing principles for living life. It was my sophomore year in college when I realized that. Ever since then, acting has taught me so much about who I am and who I want to be; it has taught me how to let go and how to hold on. It really has been a passport for amazing journeys.

What’s something most people don’t know about you?

When I was in elementary school, I used to pick a book of poetry from our library, go downstairs to the basement when the washing machine or dryer was running and give dramatic readings for my stuffed animals. I remember reading Percy Shelly, Shakespeare, Margaret Walker and Sonia Sanchez, to name a few. I guess it is no surprise that I love the classics today.