Several of spring’s loveliest ladies return this fall—and we’re delighted that they will. Here, they reflect on their roles, and why working at A Noise Within means so much. 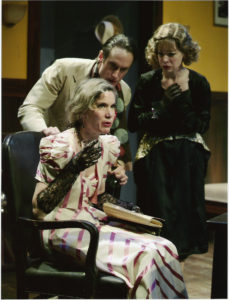 Jill Hill in A Noise Within’s 2004 production of A Flea in Her Ear. Photo by Craig Schwartz

JILL HILL, who thrilled audiences as Portia in Julius Caesar this spring, is reprising her role as the deliciously deceitful Lucienne Homenides de Histangua in A Flea in Her Ear—a role she last played in 2004.

Jill remembers her first foray as Lucienne as the first time she’d assayed farce since being a company member at ACT. She “adored the precision of the language, and the calculated timing and movement that farce demands,” adding that “the real challenge is finding the humanity that lies underneath the comic, exaggerated exterior—the real desires that makes the character a real and compelling person.”

How will Jill approach the character this time out? “It’s not so much that I will approach the role differently as it is that, quite organically, I will be coming to Lucienne at a different time in my life. As well, this is a different translation—by the wonderful David Ives—so the lines are different; honestly, it will be a whole new world and process of discovery. What a treat to have the chance to “start over,” yet I do so with an underlying confidence. There’s also an element of mystery: as if you are about to meet someone you are fond of, after a long absence. I feel so lucky to have the chance to do that.”

For Jill, “Lucienne is a catalyst to the trajectory of the play. She herself is ripe for adventure, and at a crossroads of her own. My job is to find the real person she is; this is ultimately what frees the audience to recognize the foibles of human choices and relationships. What makes this play so funny is that the hilarity of sex, chaos and insanity is not so very far from our own lives! We laugh at the characters, but we laugh with them, too—sometimes quite nervously, as we see ourselves in them.”

JUNE CARRYL graces our stage for the second time this calendar year. In the spring, she played multiple roles in Julius Caesar¸ where her talents were noted by the Company and audiences alike.

This fall, June will play Sue Bayliss in Arthur Miller’s All My Sons. She says, “What makes Sue special is how fiercely protective she is of her husband’s happiness and of her household. She’s capable of great laughter, and—despite her apparent simplicity—is very much a multi-faceted individual, both clear eyed and frank.”

June says of this pivotal role, “Sue represents the community at large, the public good. She’s content and doesn’t like change or the unknown. In that way, she represents our collective fears of that which we don’t know.

Audiences,” June continues, “will be excited by how emotionally powerful this play is. The lie driving Keller just hangs over the air and he’s doing a tap dance to keep anyone from knowing. It’s heartbreaking. In the end, what makes it so riveting is that this symbolizes the lies that all of us can keep.”

ELYSE MIRTO, who charmed us all as the Countess Almaviva in Figaro, will play another French enchantress: Raymonde Chandebise in A Flea in Her Ear, this fall.

She confesses, “Raymonde reminds me a little of Lucille Ball and her best friend, Lucienne, is Ethel!

The ‘flea in her ear’ is her suspicion and jealousy, with no proof. Instead of talking to her husband directly. She schemes to set a trap and falls into one of her own making. We can all let doubt and suspicion awake the green-eyed monster. Did I mention I also have green eyes which will help when playing this part?

Like Figaro, this play is fast, funny, and sexy! I’m excited to be working, for the first time, with the wonderfully creative and innovative Julia Rodriguez-Elliott.”

MAEGAN MCCONNELL won kudos for her alternately funny and fierce portrayal of Lucy Brown in The Threepenny Opera. In the fall, she will portray Ann Deever in All My Sons. “In many ways,” Maegan believes, “the play can be seen as a parallel to Greek tragedy, and Ann could be considered the message bearer of the play. She is sweet and well meaning, but will take drastic measures to ensure her happiness by the end of the play. Ann is flawed and can be both selfless and selfish, as all people can be. The Kellers represent what her life was before her father was found guilty and I think in a way she longs for what she once had.”

Maegan feels confident that “audiences will respond to the humanity of this play. The first time I read it I couldn’t put it down. It was suspenseful, heartbreaking and beautiful all at once. I couldn’t stop thinking about it… I still can’t.”

DEBORAH STRANG, Resident Artist at ANW, will be playing Kate Keller in Arthur Miller’s All My Sons. This is actually her third time doing the play—and second time doing Kate. I love this play, I love Arthur Miller, and would revisit his work every few years if I was able to; I always find something new and will again this time, I suspect. This role will resonate especially strongly with audiences because everyone knows a Kate Keller. She’s the neighborhood mother that we all call Mom, from the ideal family down the street– the family we all wanted to be a part of. And then we begin to peel away the lies…