When you visit ANW you’re sure to see the smiling faces of our head ushers Troy and Jonathan. You might have also recognized them onstage this past season in our production of King Lear. Whether it’s the front of  house or behind the scenes, these guys know the ins and outs of our theatre! 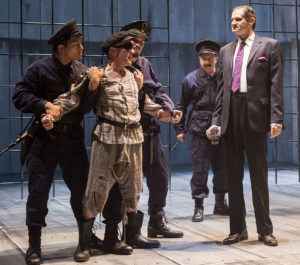 What made you want to be an actor?

Jonathan: I actually didn’t start acting until I got to Occidental College where I began taking acting classes for the first time; it didn’t take much for me to fall in love. Upon graduating, I took a ten-month Education Internship at A Noise Within where I learned about the inner workings of this amazing theater. Even after my internship ended, I continued to stay involved by helping out in the Box Office and as a Head Usher. When the opportunity arose to audition for King Lear, I took it without hesitation and am extremely grateful that Julia and Geoff believed I could make a contribution to their production.

Troy: I actually started out as a ballet dancer and was preparing the go to college as a dance major. The winter before college I suffered a major back injury that required surgery. The doctors and my teachers said I would not be physically able to pursue a successful dance career with such an injury. I had spent most of my childhood and young adult life dancing. To have that ripped away from me was devastating. After almost a year of physical therapy and counseling for depression, my best friend convinced me to take a beginning acting class with him at Rio Hondo College. In the class, we had to see a professional production. The show we saw was The Winter’s Tale at A Noise Within. I had never seen a professional play, let alone Shakespeare. The performances from Resident Artist Jill Hill as Hermoine and Geoff Elliot as Leontes are what lit the fire in me to pursue acting. I especially resonated with Geoff’s performance. To see a man have his whole world crumble before him spoke to me and what I was going through with having to leave ballet. I did not have the words to describe what I loved about it, but after that show I turned to my professor and said, “I want to do that.” Geoff Elliot and A Noise Within are what made me want to get into acting.

What was it like to see both sides of a show – front of house as well as onstage?

Jonathan: It’s very interesting to see both sides of a show with each performing its own set of challenges. However, they both have the same results, which is to entertain the patrons to the best of my ability.

Troy: It really helps me appreciate what goes into the theatre-going experience. One day I am on stage acting, the next I am standing in the back of the house watching the audience react to Man of La Mancha. It feels like I am part of a family. 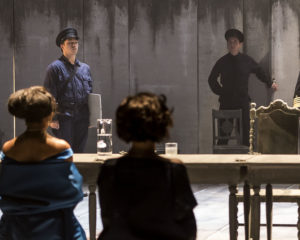 Do you have any funny backstage stories that you can share with us?

Troy: For King Lear, I wore a fake handlebar mustache for the majority of the show. During the student matinees, I would hear the students refer to me as Super Mario. It started to become a running joke for the cast and crew. We would make lame jokes with a cheesy Italian accent.

What is your favorite part about working and acting at ANW?

Jonathan: I love the opportunity to meet and get to know the amazing actors and staff. It is because of those people that I am able to get through rehearsals and working the front of house when things get stressful.

Troy: I get to see from both perspectives what an amazing organization A Noise Within is. A lot of patrons will come up to me when I am ushering and tell me how amazing the actors and the show were. I then get to be with those actors on stage the next day. To be a part of that is nothing short of amazing. It’s beyond my wildest dreams that I get to share the stage with my heroes. I cannot thank Geoff and Julia enough for the opportunities to be involved with A Noise Within.