On select performances of A Christmas Carol, join us before or after the show for Christmas carols with Resident Artist Cassandra Marie Murphy and her partner John Shartzer.

“Christmas holds a very special place in our hearts. We fell in love spending many a night around a fire, singing songs and drinking wine. There’s something about the holidays that makes you want to be close to someone, so naturally many of the songs were holiday tunes. So, you’ll hear a lot of those tonight. Mostly classics but all our faves. Basically, anything that isn’t too difficult for John to play on the guitar. We hope you enjoy.”
-Murphy and John 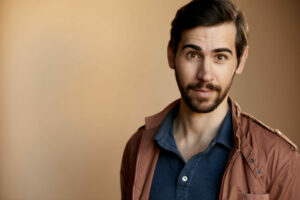 Hello friends. I’m thrilled to be making my A Noise Within Lobby debut. It has been a fun year! Many thanks to our little Nora, of course, but professionally I’ve done some stuff too. I got to see myself doing some sign language in the show Dahmer on Netflix. Had the opportunity to film an episode of 911: Lonestar with Rob Lowe. (So dreamy) I also began filming episodes of a new freeform show I’ll be recurring on, called While You Were Breeding. For the theatre lovin’ folk…Facebook tells me it was just one year ago that I played Mr. Green, in Clue, down in La Mirada. Mostly I’m proud of Cass and the work she has done at this theatre and I am honored to be here tonight. Thanks. 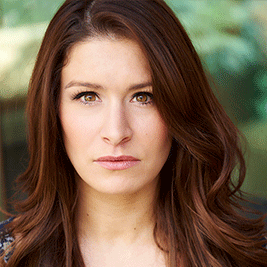 What a joy it is to spend some time here at A Noise Within during the Christmas Season! Recently becoming an RA has been such a special gift – Thank you Geoff and Julia! Happy to announce in February of next year I will be making my Center Theater Group debut at The Ahmenson Theater in the revival of Secret Garden. Audiences at ANW might remember me in Animal Farm, Metamorphoses and Man of La Mancha. It is one of my greatest joys being here tonight. Enjoy the music!