Black History Month celebrates black culture, black power, and black legacy throughout our world history, whether it be in politics or in literature or in the arts. With our production of Othello, the Shakespearean tragedy of a black male protagonist, now opening on our stage, we wanted to recognize the legacy of artists of color who have led us to this moment: beginning with the indomitable Ira Aldridge.

Ira Aldridge, born in Manhattan in 1807, was one of the first African American actors to assume the role of “the Moor of Venice” – Othello. Aldridge experienced his theatrical debut when William Alexander Brown opened the African Grove Theatre, the first black theatre troupe, in New York in 1821. Aldridge was a young teenager at the time, playing alongside the theatre’s star actor James Hewlett, who refuted white ownership of Shakespeare by naming himself “Shakespeare’s Proud Representative” despite harsh and violent reaction to his roles. The African Grove Theatre was burned down in 1823 under suspicious circumstances, after which Ira Aldridge sailed to London.

In 1825, Aldridge made his European debut as Othello at the Royalty Theatre in the East End. One critic disapproved of the “Gentleman of Colour lately arrived from America,” but he admitted that “his death was certainly one of the finest physical representations of bodily anguish we ever witnessed.” Aldridge was seventeen years old. 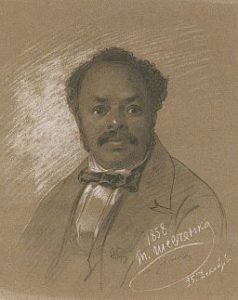 The more Aldridge performed, the more he enthralled and challenged audiences with his dramatic Shakespearean roles juxtaposed with bumbling comedic black stereotypes such as Mungo – the first blackface comic figure from The Padlock. Aldridge boldly tackled everything from classic tragic heroes, to popular songs, to drama lectures, to self-parody and parody of blackface parodies; his most subversive move answered blackface by putting on whiteface. He encompassed the worst and best of black representation onstage, exhibiting artistry and comedy and emotion in every role. Aldridge once said that he wanted to “assert the claims of my kind to equality of intellect and right feeling with the more favoured portion of the human race.”

Of course, Aldridge didn’t go without hateful controversy or racial prejudice. In 1833, the Theatre Royal offered Aldridge a short run in Othello, and the London press savagely tore his performance to shreds. The Figaro in London vowed to inflict on Aldridge “such a chastisement as must drive him from the stage he has dishonoured, and force him to find in the capacity of footman or street-sweeper, that level for which his colour appears to have rendered him peculiarly qualified.”

Ignoring such vile criticisms, Aldridge took his theatrical tours all through Europe (he was a huge hit in Germany) and earned critical and audience acclaim. He received several honors, including a Gold Medal for Art and Science from the King of Prussia, the Grand Cross of the Order of Leopold from the emperor of Austria, and the title of Chevalier Ira Aldridge, Knight of Saxony. While Aldridge was on tour in Russia, one critic said of him, “From Othello is torn the deep cry, ‘Oh misery, misery!’ and in that misery of the African artist is heard the far-off groans of his own people, oppressed by unbelievable slavery and more than that – the groans of the whole of suffering mankind.”

This is only a small glance at the life of Aldridge, who was complicated and contradictory in his own right, but his work helped to make way for other great Othellos such as Paul Robeson, James Earl Jones, and many more. And we look forward to seeing our newest rendition of Shakespeare’s tragic hero in Wayne T. Carr, onstage now for our production of Othello.